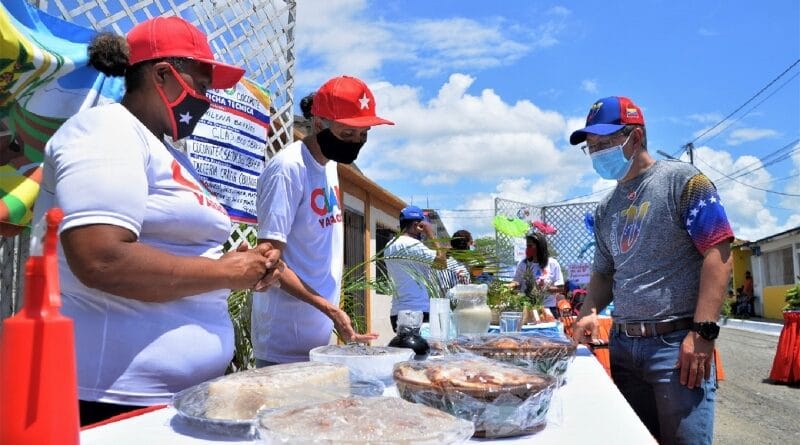 The Special Land Allocation Plan was announced last Friday on the program’s fifth anniversary. The proposed reform comes as part of efforts to have half of the 36,000 community CLAPs producing some of the foodstuffs they distribute by the end of the year, with special emphasis on animal protein.

“It will require much work, methodology, planning and initiative (…) I hope to see a detailed plan soon, so that the CLAPs may have the spaces where they can produce,” the President said.

Friday was also celebrated as National Food Day in honor of the “vanguard” CLAP program, which was launched by the Venezuelan government in 2016 to supply food bags to the country’s population.

Authorities claim that the program’s current reach has increased to seven million households this year, with the aim being to supply the bags every two weeks. The bag normally contains basic goods including flour, pasta, rice, beans, sugar and cooking oil, and on rare occasions can also include proteins such as sausage meat, chicken or sardines. State subsidies can be as high as 99%.

Alongside the proposed land assignments, Maduro also announced that problems caused by US sanctions have forced the program to switch to nationally produced foodstuffs. As much as 80% of CLAP products were previously imported from places including Brazil, Mexico, Panama, Turkey and China, according to government data.

“[The Trump administration] persecuted those businesses which sold us food (…) trying to suffocate the entire country, but we as popular power are more powerful than the gringos,” Maduro said during the anniversary broadcast.

In 2019, Washington sanctioned the food program and has subsequently levied secondary sanctions against suppliers, shipping firms and bankswhich work with Caracas, as well as hitting food-for-oil swap deals. In one such case, Colombian-Venezuelan CLAP contractor Alex Saab was detainedin Cape Verde last June following an Interpol warrant. He is currently awaiting trial, with local courts rejecting an extradition request from the US this week.

To improve efficiency, the government also set up a CLAP corruption hotline for grassroots complaints and authorized payment through the Homeland Card, which is also used to coordinate a number of other social benefits. Maduro also mentioned handing more control of the food bag contents to regional authorities, without offering further details.

A number of organizations, however, have challenged the government’s commitment to land reform, as well as its claims over the success of the CLAP program.

On Sunday, a host of grassroots campesino collectives published an open letter to the government decrying exclusion from national workgroups and talks aimed at activating idle rural land.

The letter pointed out that while those small-scale producers have been sidelined, authorities have met with the FEDENAGA National Cattle Ranchers Federation. Organizations such as the the National Campesino Struggle Platform accuse the large landowners of holding responsibility for the assassination of over 350 campesino leaders since 2001.

The country’s largest campesino bloc has repeatedly cast doubt on the government’s commitment to land reform in recent years, as well as corruption in the agroindustry and import fields, impunity for large landowners, and inefficiency in government-led seed and fertilizer supply chains. A number of presidential promises to reform the sector following a high-profile meeting with Maduro in 2018 are still unfulfilled.

Likewise, a number of criticisms have been landed against the CLAP food program itself.

Last year, the Communist Party (PCV) denounced that the program was being used for electoral control in a number of regions of the country, while United Socialist Party (PSUV) number two, Diosdado Cabello, also issued apublic reprimand of CLAP leaders in Barinas state who were photographed using CLAP sausage meat handouts to boost voter turnout.

A number of anti-government NGOs have also been highly critical of the CLAP program, claiming that its scope and frequency are much lower than the government suggests.

One of them, Citizenship in Action, released a report last month which concludes that only 2.3 million households received the food bags in 2020, roughly 38 % of the total population, well below government figures. The sample size, demographic makeup and other details of the report were not disclosed.

The report alleges that the food supplies were only delivered every two weeks in 27% of type I parishes with high population density and lowest incomes, where over 47% of CLAP products are destined. In type II, III and IV sectors, with lower population density and greater average incomes which make up 64% of the country, the two-week goal was met only 19 and 22% of the times, it claimed.

Finally, the organization, as well as a number of consumer platforms, has reported a number of irregularities in the products supplied in the bags, claiming that “the further away one is [from the capital], the less food products are supplied.”

Other polls of CLAP supply indicate that coverage varies between the government’s data and the lower figures offered by the NGO.

Last month, United Nations Special Rapporteur on the impact of sanctions Alena Douhan concluded that the program’s decreased regularity and range of products was one of the consequences of US unilateral measures, which she described as “illegal” and “devastating”. For his part, CLAP National Coordinator Freddy Bernal stated in 2019 that delivery in the areas most removed from the capital was not possible every two weeks due to high transport costs, a problem which has been worsened by recent sanction-induced diesel shortages.