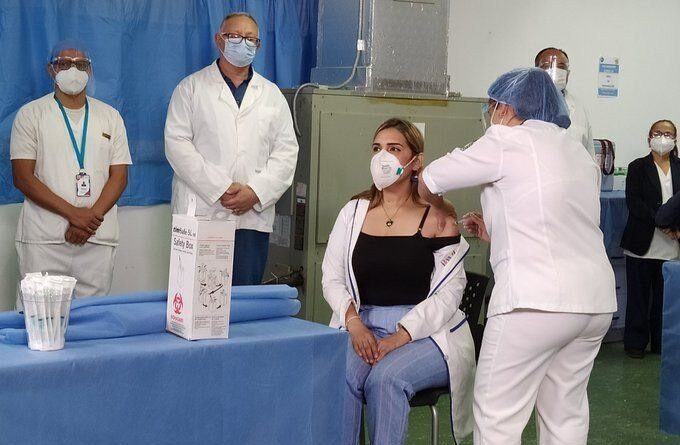 This Thursday, February 18, 2021, Glendy Rivero, a young medical doctor from Miranda state, was the first Venezuelan to be vaccinated with Sputnik V. Rivero is a physician by profession who works at the Victorino Santaella hospital, Los Teques, Miranda state. The doctor was immunized during the start of the National Vaccination Plan against COVID-19, which began in Greater Caracas.

The information was released by the Venezuelan Head of State, Nicolás Maduro through his official Twitter account @NicolasMaduro, where he wrote “Glendy Rivero, a young doctor from Miranda state, was the first Venezuelan to be vaccinated with Sputnik V. All my affection for you woman! We are starting this first phase of immunization on the right foot, in this fight against the pandemic, and for the defense of our people’s health.”

RELATED CONTENT: ‘They are not Being Distributed Fairly’: UN Assures 10 Countries Monopolize 75% of Vaccines (COVID-19)

Glendy Rivero, 37, a native of Guarico state and mother of two children, graduated from the Rómulo Gallegos National Experimental University of Los Llanos Centrales as a surgeon in 2008. She worked as a specialist in general surgery at the José Ignacio Baldo El Algodonal Hospital in 2012. She currently resides in Los Teques, Miranda state and works at the Victorino Santaella Hospital.

Attempted resuscitation of former deputy Guaidó
Last December, President Maduro announced the signing of an agreement with Russia for 10 million doses, and yesterday he clarified that the agreement with Russia cost Venezuela $200 million US, which is in alignment with the price of vaccines announced by Russian authorities at the start of production—$20 per vaccinated individual (with two doses).

Former deputy Juan Guaidó, in a new attempt to bring his forgotten profile back to life, and apparently forgetting that he had boycotted Venezuelan attempts to use the gold seized by the Bank of England to buy vaccines and medicines, posted on his Twitter account that President Maduro’s announcement was suspicious because, according to Guaidó’s “calculations,” Venezuela paid twice as much as they should have for the vaccines. It appears that Guaidó miscalculated the amount of doses needed to achieve immunization—or maybe he knows something that we don’t.

Mass vaccination launched
The launching ceremony was led by the Executive Vice President, Delcy Rodríguez, who said that Venezuela is experiencing a historic day, successfully implementing vaccination with Russia’s Sputnik V despite the economic blockade, and all the attacks against the country.

Rodríguez reported that the vaccination process will be carried out in an organized manner, and that a registry of vaccinated individuals will be compiled. The information will be cross-checked with the robust Patria system, in which more than 20 million Venezuelans are enrolled.

“Medical and nursing personnel, those who are in ICUs, in respiratory triage, in the laboratories that carry out the tests, and the transport personnel of the health sector will be the first to be vaccinated,” she said.

In the capital city of Caracas, the healthcare process began at the Dr. Miguel Ángel Rangel University Hospital, in the Coche parish. From here, Vice Minister of Collective Health Networks Dr. Marisela Bermúdez reported that in Caracas, the immunization of more than eleven thousand health workers is planned in a progressive and staggered manner.

Bermúdez specified that the personnel who will receive priority vaccination will be those who who work in areas of high viral concentration such as respiratory tests, hospital rooms for patients with COVID-19 and intensive care rooms, as well as workers, orderlies, nurses, doctors, and cooks.

Featured image: Photo courtesy of the Governor of Miranda state.