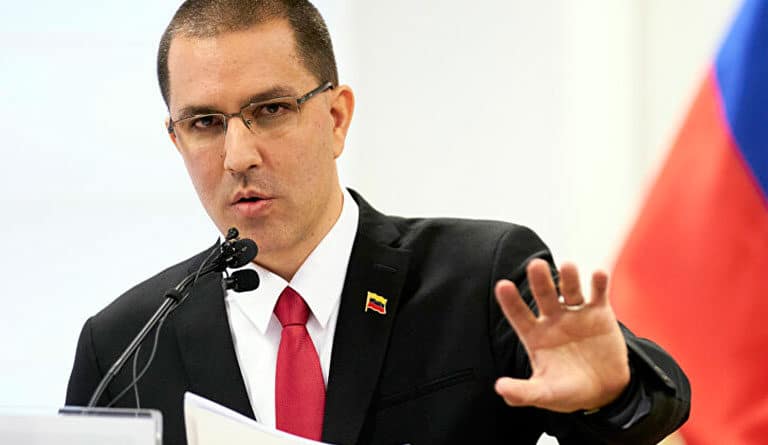 This Wednesday, February 10, the Venezuelan Minister for Foreign Affairs, Jorge Arreaza, sent a letter to the General Director of the German state media conglomerate Deutsche Welle (DW), Peter Limbourg, “to call them to reflect on their sustained and tendentious editorial attack against Venezuela,” and their marked pattern of misinformation regarding the Caribbean nation.

This was reported by Arreaza on Twitter, where he published the aforementioned letter. The Minister for Foreign Affairs considered that the approach of the state media wasn’t very reflective.

“The type of approach that you have decided to use on Venezuela has fractured the most basic principles of journalism, such as the differentiation between facts and opinions, the contrast of information and objectivity, opting, rather, for a treatment marked by the false news, symbolic violence, the whitewashing of the actors of the multiple aggressions we have suffered, and the simplification of the economic, financial and commercial blockade that the whole country suffers,” stated the letter in part.

Likewise, Venezuela regretted that the principles of informative coverage that prevail in that German media outlet consist “of manufacturing a uniform representation of a certain country under the sole gaze of the West, to justify all kinds of aggression.”

“These are the principles that, unfortunately, make up DW’s editorial line against the Bolivarian Republic of Venezuela, and this is revealed by recent publications on its website,” wrote the Ministry in the statement. The letter also condemned the spokespersons supporting this information for their clear alignment with promoting a forced change of government in Venezuela.

In the letter, the foreign affairs minister cited several articles published by DW in which the pattern of misinformation and biased content around Venezuela appeared in different aspects.

Such was the case with an article published on January 14 of this year, covering an alleged “special operations school” where Cuban and Iranian agents “train” Venezuelan military personnel in various “torture tactics” to be used against the civilian population.

Here is a part of the content of the letter:

“From the city of Caracas, capital of the Bolivarian Republic of Venezuela, I respectfully write to you to express my rejection of the editorial line that Deutsche Welle [Spanish language edition] (DW), the media chain that you direct, has developed against my country. The type of approach that you have decided to use on Venezuela has fractured the most basic principles of journalism, such as the differentiation between facts and opinions, the contrast of information and objectivity, opting, rather, for a treatment marked by fake news, symbolic violence, whitening of the actors of the multiple attacks that we have suffered and the simplification of the economic, financial and commercial blockade that the entire country suffers.

Before detailing precisely the elements of overt propaganda that make up DW’s editorial line, I allow myself a necessary contextualization to help you understand the origin of the culture of war that, unfortunately, has normalized the use of information as a political weapon.

The cycle that spanned from the first Gulf War to the punitive intervention on Iraq in 2003, taught us the definitive divorce between communication and information, and in that same dimension consolidated the use of the media as an instrument of conquest and domination. These events were of central importance in the way of reporting: the Gulf war was the first war televised and broadcast live, covered with a logic of information saturation that blurred the border between cruelty and spectacle, but also between events and representations. The one in Iraq, although not singular in itself, since there are plenty of cases of wars that were unleashed by false information, had as a special feature the monopoly support of the media, which acted as institutions at the service of the ambitions of Western power, propagating an interpretation contract that consisted of highlighting the ‘civilizing’ mission of the rich countries against the ‘barbarism’ of the poor countries of the Global South, those that have never stood out precisely for bombarding nations with ‘weapons of mass destruction.’

Precisely, these principles of ‘news coverage’ are those that have shaped and strategically oriented the behavior of the media such as the one you lead in recent times, which consists of manufacturing a uniform representation of a certain country under the sole gaze of West, to justify all kinds of aggressions.

While the mercenary incursions, attempts at a soft coup, and the economic, financial and commercial blockade maneuvers reveal the physical damage of the unconventional war underway against the Bolivarian Republic of Venezuela, the combined strategy of disinformation, propaganda and informational terrorism, directed by the Western media towards my country, constitute evidence of prolonged psychological and moral damage against our people and their institutions, with the obvious aim of undermining the public image of the country.

The people of Venezuela are victims of two instruments of war and reconquest used in parallel: while the political, economic and international war tries to take over our natural resources and weaken our institutional and territorial integrity, the information war seeks the subjugation of the soul and mind of Venezuelans, simultaneously whitewashing the cruelty of external aggressions and preventing the reality of the country from being seen objectively in the world. The blockade is also mediatic and is driven by the same motivations as the economic one: to manufacture a crisis that ‘would require’ as a ‘solution’ the unilateral and abusive interference of Western countries.

These are the principles that, unfortunately, configure DW’s editorial line against the Bolivarian Republic of Venezuela, as revealed by recent publications on its website.

Specifically, DW’s coverage of events in Venezuela mixes disinformation with the leverage of spokespersons clearly aligned with the promotion of regime change. The use of the generalization of partial facts, the ideological proselytism disguised as journalistic analysis, together with the demonization of the Bolivarian Government and the use of incomplete or biased information to distort reality is also a pattern in its informative treatment.

An example of this type of approach, totally divorced from what is taught in journalism academies, is an article published on January 14 of this year about a supposed ‘special operations school’ where Cuban and Iranian agents ‘train’ Venezuelan military in various ‘torture tactics’ to be used against the civilian population. For the realization of this piece, the outlet took as its source a report published by the Casla Institute, directed by the Venezuelan Tamara Suju. DW gave the report credibility, cited its claims and, without checking the plausibility of the ‘sources’, presented the product to the public with an affirmative title: ‘Iranian and Cuban officials train military in Venezuela to “manipulate society”‘ .

DW not only found Suju’s farce true, but also omitted data that cast doubt on the credibility of the director of the Casla Institute as an independent spokesperson concerned about the human rights situation in Venezuela. For example, it was omitted that Suju was illegally named by former deputy Juan Guaidó as an ‘ambassador’ to the Czech Republic, a position she ‘resigned’ in August 2019; Nor did it mention that, in August 2018, Suju expressed through her Twitter account that she demanded ‘humanitarian intervention, more sanctions, more blockade’ against Venezuela.

Another example that illustrates this pattern of misinformation is a piece published on January 12 of this year. There, DW accused the Bolivarian Government of attacking the ‘private media,’ unifying scattered facts to simulate a kind of systematic attack against the press and make sense of this premise.

They took statements from the Honduran magnate Jorge Canahuati, president of the Inter-American Press Association (IAPA), from whom they also omit his contribution to the coup against the president of Honduras Manuel Zelaya, in 2009, an undemocratic precedent that disallows him to dictate any judgment against Venezuela.

In addition to making generalizations based on isolated facts and of different origin, nature and intensity (such as the VPI investigations or the validity of the Law Against Hate, etc.), DW falls into an obvious falsification, stating that ‘a talk on journalism from the National Union of Press Workers, at the British embassy in Venezuela, was enough for the regime to protest against the Government of Boris Johnson for alleged illegal financing.’

DW twists reality and avoids commenting that these accusations of illegal financing have real bases, not because of the union event that they cite but because of declassified documents that show that the government of the United Kingdom and the Westminster Foundation for Democracy (WFD) have financed private Venezuelan media to contribute to a climate of opinion adverse to the Bolivarian Government since 2016, with a contribution of more than one million dollars. With this deliberate omission, DW has tried to undermine the credibility of Venezuela’s allegations by covering up the illegal actions of the UK Government.”