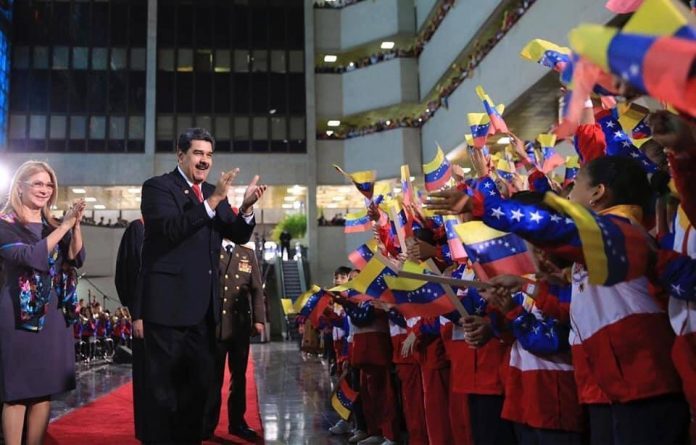 Despite being elected with over two-thirds of the vote last May in an election given a clean bill of health by hundreds of international observers, President Nicolas Maduro’s swearing in today provoked the usual round of abuse and threats.

Paraguayan President Abdo Benitez rushed to prove his adherence to the US-led encirclement campaign that seeks to deprive Venezuela of allies, strangle its economy, facilitate frequent outbursts of lethal violence by the country’s right-wing opposition and even justify a possible invasion.

No sooner had Maduro been sworn in than Benitez severed diplomatic relations and closed Paraguay’s embassy to the Bolivarian Republic.

This is no great departure for Benitez, who was railing against alleged “abuses of power” by the left-wing Venezuelan and Nicaraguan governments on the day he became president.

Indeed you might even say targeting leftwingers was in Benitez’s blood: his father was secretary to Paraguay’s long-term tyrant Alfredo Stroessner, whose 1954-89 dictatorship participated in Operation Condor, the US-led Latin American terror campaign that featured kidnappings, disappearances, torture and extrajudicial killings of suspected leftwingers across six countries.

Benitez is the leader of Stroessner’s ruling Colorado Party that put thousands of socialists to death, waged a genocidal war that all but exterminated the indigenous Ache people in order to hand their land to US and European corporations for mining and logging and provided a safe haven for one of the most notorious nazi war criminals, Dr Josef Mengele.

This backdrop, while grim, is sadly typical of a continent where the right has made a comeback on a large scale. Brazil’s new President Jair Bolsonaro, whose only criticism of his own country’s military dictatorship is that it didn’t kill enough people, will find nothing objectionable in Benitez’s family album.

He too plans to purge his country of socialists and sacrifice its indigenous inhabitants and their natural resources to the maw of extractive corporations. He too has made clear his willingness to help crush the Venezuelan revolution.

This is why the solidarity action outside Britain’s Venezuelan embassy today was so important. The balance of power has changed across Latin America, and the progressive gains seen in so many countries during the “pink tide” are being rolled back. This has not, by and large, been a democratic process.

It’s true that Argentinian President Mauricio Macri defeated his left-wing predecessor Cristina Kirchner in an election — but it was marred by the total control of Argentinian media by the Clarin corporation, and his government’s relentless persecution of her since (alongside the now routine clampdown on indigenous rights activists) shows how deep is his commitment to democratic principles.

In Brazil, a constitutional coup against the elected president and a ban on the Workers’ Party’s most popular candidate standing for election were required to end the left’s ascendancy and usher in a new and darker era.

Venezuela’s embattled government is derided as a dictatorship despite winning election after election. Opposition promises to respect the result are immediately dropped as soon as it comes in; other parties boycott votes they suspect they’ll lose and then claim their non-participation renders the result invalid.

Violent protesters set government supporters on fire and murder cyclists with wire strung across streets; militiamen announce military coups and attack the Supreme Court with grenades, and the government is denounced for attempting to defend people from such attacks. The war of disinformation against Venezuela regularly reaches fever pitch.

Solidarity with the Bolivarian revolution was always important. But Britain’s Defence Secretary has mooted new military bases in the Caribbean and hints at establishing a wider global arena for wars of aggression like those we helped launch against Yugoslavia, Afghanistan, Iraq and Libya.

It will be the job of socialists to show solidarity with the people of Latin America and make further attacks on Venezuela’s elected government a political impossibility.