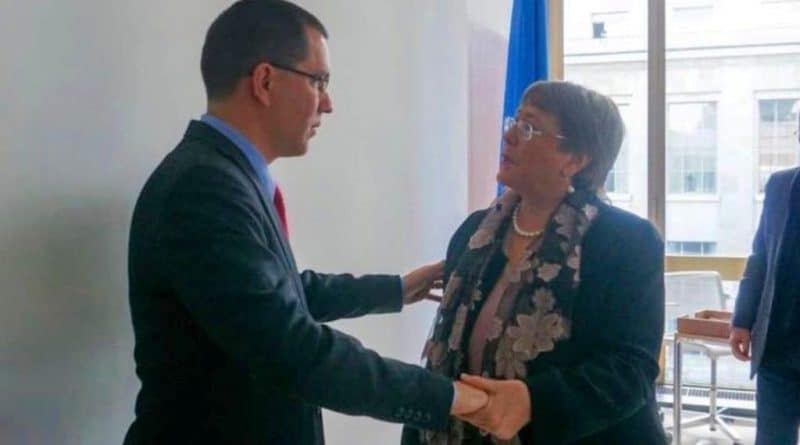 Venezuela ratified this Thursday its willingness for dialogue and cooperation with the Office of the High Commissioner of the United Nations on Human Rights, Michelle Bachelet, in addition to its strong commitment to the promotion, protection and implementation of these guarantees.

Venezuela’s position was remarked by Vice Minister for Multilateral Issues, Alexánder Yánez, at the 43rd Regular Session of the Human Rights Council held in Geneva, Switzerland, at the time of responding to the report on Venezuela in the area of assistance and technical cooperation presented by the High Commissioner.

“The Venezuelan government has a solid commitment to the promotion, protection and realization of human rights and so these UN officials who are in the country have been able to verify this” and “it was recognized by the majority of the UN member states that supported the election of our country to join this Council, in spite of the pressures of the United States”, the vice minister emphasized, as the Foreign Ministry noted on Twitter.

“31 years after the massacre known as the Caracazo, executed in Venezuela by governments enfolded in neoliberal policies, the Bolivarian government ratifies its unrestricted adherence to human rights and its willingness to cooperate with the Office of the High Commissioner,” Yánez insisted.

In this forum, Venezuela reiterated “its serious and well-founded complaints about the methodology used by the Office of the High Commissioner to prepare its reports on the situation in the country,” said the deputy minister.

He recalled that as a result of the Letter of Understanding and the work plan signed at the end of 2019, cooperation and technical assistance on different human rights issues has been reinforced, including the design of the second National Human Rights Plan.

He also reaffirmed that the team of the Office of the High Commissioner in Caracas “has received the full support of the competent organs of the Venezuelan state for the full fulfillment of its mission,” he said.

“The staff of the Office of the High Commissioner who remain in Venezuela have been able to verify that the situation of human rights in the country is markedly far from the panorama that a group of governments repeatedly presents in this council,” said the deputy minister.

Complaint against the criminal blockade
On the other hand, the vice minister denounced the permanent aggression of the US government with the imposition of coercive, unilateral and arbitrary measures against the Venezuelan people.

“Once again, we denounce in this Human Rights Council the obsessive persecution carried out by the US government against the Venezuelan people. It is, without doubt, a systematic and widespread attack against the civilian population. It is a crime against humanity,” said Yánez.

He said that more than 100 thousand Venezuelan migrants are affected by these coercive measures imposed on the Venezuelan Consortium of Aeronautical Industries and Air Services (Conviasa) that has facilitated the return to the country of nationals who, being in a condition of vulnerability, decided to return to their nation taking advantage of the Return to Homeland Plan.

In addition, he revealed that “the actions taken by the US government against foreign companies that sell Venezuelan oil are added to this wave of odious and illegal measures, which seeks to deprive Venezuela of its main source of income regardless of the effects.”