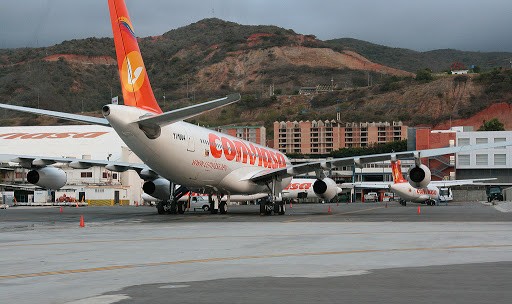 This Saturday, through a statement issued by the Vice Presidency of the Economy, the Bolivarian Republic of Venezuela rejected the coercive and illegal measures of the US Department of the Treasury against the Venezuelan airline Conviasa. Disseminated on social networks by vice president of Economy, Tareck El Aissami, the Bolivarian government statement described the aggression of Donald Trump’s government against a Venezuelan company as unacceptable and arbitrary.

On Friday afternoon, the Treasury Department published on its website that the Office of Foreign Assets Control (OFAC) included 40 aircraft of this airline on the list of specially designated nationals and blocked persons (SDN) ).

Below the full statement taken from the MFA website:

Venezuela rejects attack of the US government against state airline Conviasa

The Bolivarian Republic of Venezuela strongly rejects the new onslaught of the United States Government and its imperial machinery against the Venezuelan people, its democratic institutions and state-owned companies, specifically, the illegal and arbitrary measure dictated by the Department of the Treasury of the United States today, against our national airline Conviasa. This unacceptable and rude aggression aims to hit a Venezuelan company that provides a public service for the Venezuelan people and other peoples of the world.

With this new unilateral, extraterritorial and violating coercive measure of International Law and International Treaties that regulate Air Transport, the Trump administration takes another step in its escalation of aggressions against the Venezuelan people. Beyond the company’s commercial operations, this oppressive measure aims to affect the humanitarian policies of the Bolivarian Government of Venezuela: the Return to the Homeland Plan, aimed at the return of Venezuelan migrants who are in a vulnerable situation throughout the region, and the Miracle Mission, a medical program for the transfer of patients to carry out the respective consultations, ophthalmological operations and control of their treatment.

These measures seek to suffocate the Venezuelan people, restricting their right to national and international mobility and jeopardizing the aeronautical safety of the entire country. However, the Bolivarian Government, the workers, crew members, and Conviasa administrative staff, reaffirm their unwavering will to continue to serve the Venezuelan people and other peoples of the world. On board the aircraft attacked today by the most devastating empire known to mankind, Venezuela will strengthen its commitment to peace and solidarity in building a more human world.