Thanks to the agroecological practices used by national coffee growers, Venezuela currently produces 18 quintals of coffee per hectare on a national scale, positioning the states of Lara, Portuguesa and Trujillo as the main producing entities in the country. “We went from 3,188,880 quintals in 2021 to a projection of 3,831,498 quintals for this year [a bit more than 380,000 tons],” said Venezuelan President Nicolás Maduro this Wednesday, May 4, in Fuerte Tiuna, where the First Venezuelan International Specialty Coffee Meeting 2022 (EICEV) is being held.

In this regard, he confirmed that “this is only the beginning of a growth process that we are going to carry out, because now it is up to all of us. Venezuela made a leap in the production of quintals of coffee.”

He pointed out that the states of Lara, Portuguesa, Trujillo, Mérida, Táchira, Monagas and Sucre, in that order, are the main coffee producers, and that together they produce 85% of the country’s coffee. They are followed by the states of Yaracuy, Anzoátegui, Barinas, Aragua, Carabobo, Falcón, La Guaira, Zulia, Miranda, Cojedes, Guárico, Bolívar and Caracas. “Even in Caracas coffee is already being produced, there in the Waraira Repano mountain, in Galipán,” the president said.

In Venezuela there are 37 seed producer bodies (Coffee Seed and Seedling Production Centers). Of these, 14 are in Táchira, six in Mérida, five in Trujillo, six in Lara and six in Portuguesa. In addition, there are 95 associations of coffee producers or processors, which has made it possible to strengthen and consolidate the export of this item.

Of these 95 associations of coffee producers or processors, 35 are in Lara, 27 in Portuguesa, 11 in Trujillo, 10 in Mérida, five in Táchira, two in Miranda, one in Anzoátegui, one in Aragua, one in Barinas, one Monagas, and one in Yaracuy. In addition, there are 308 roasters throughout the country.

“Venezuela has recovered its real economic growth with its own efforts and its own technology, despite the blockade and economic sanctions, and this time amid the pandemic it has been miraculous,” the president pointed out. 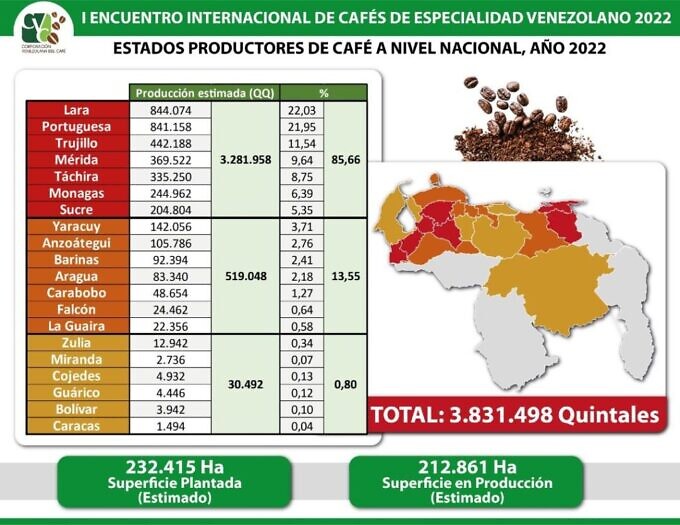 President Maduro recalled that in 2021, Venezuela experienced growth above 4%, “and this year world forecasters say that we are going to grow between 5%, minimum, to 20%.”

Offering a report of this year’s coffee production, he highlighted that since 2017, 40,000 hectares have been modernized at the national level, with the purpose of obtaining a product of quality.

Financing the sector
President Maduro called on public and private banks to provide support to the country’s productive coffee sector. “All producers are in great demand, because the economy is beginning to grow and everything is an exportable product… That is why we must go to direct financing, acupuncture style, to those who need it, directly financing, democratizing capital,” he said.

The president insisted that the capital of public financing funds should go to the expansion of national production. “Attention, President of the Bank of Venezuela, of the Agricultural Bank, Banco del Tesoro, President of the Banco Bicentenario del Pueblo, attention presidents of private banks, here are our producers who need immediate credits, it must reach them at a good interest rate, with easy conditions for them to expand their production,” he said. 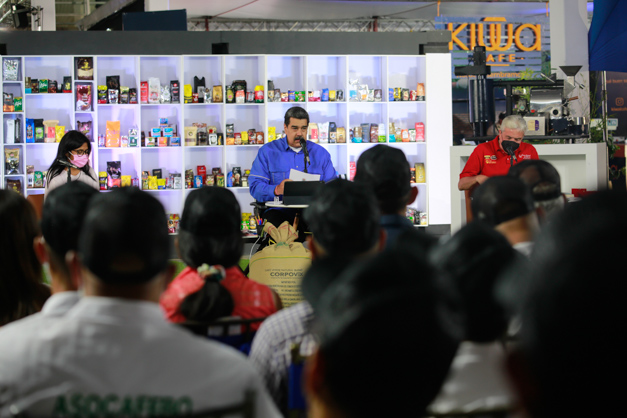 Finally, he gave awards to 15 national producers, to highlight the work of coffee growers in the country, who for two months exhibited their products to international tasters. Their product was also sampled in a study on Venezuelan coffee production, which sought to verify the quality and performance of this crop, as part of the development of the national productive economy.