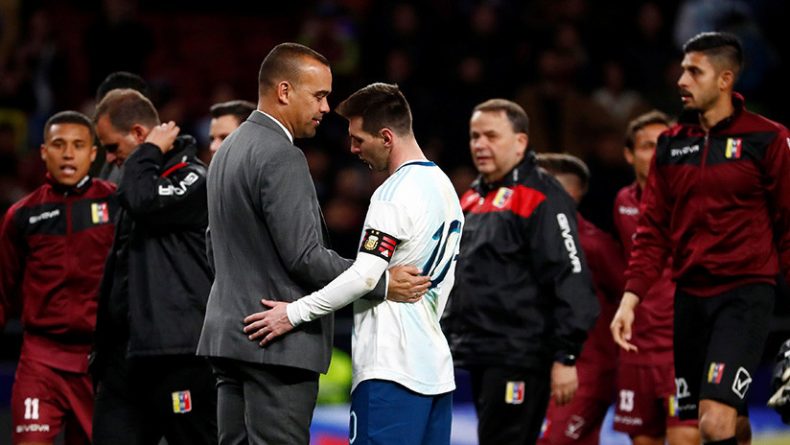 23/Mar/2019.- The decision of Rafael Dudamel occurred after the ‘Vinotinto’ won 3-1 against Argentina, in a match played in the Metropolitan Wanda of the Spanish capital (Madrid).

The technical director of the Venezuelan national soccer team, Rafael Dudamel, offered his resignation to the Venezuelan Football Federation (FVF), before the “disrespect” of the representative of the opposition deputy Juan Guaidó in Spain, Antonio Ecarri, who visited the gathering of the team in Madrid and made public a video of the visit that had been agreed not to be made public, after an unusual Venezuelan victory.

RELATED CONTENT: This is Maduro’s Message to the Sub-20 Soccer Team

After the surprise victory of the Venezuelan team against the Argentine team, Dudamel was sad about the political use that Ecarri made of the national team.

“During all this time we have been living in very murky waters because we are very politicized, today we have had a very sad experience that has me disappointed,” said the coach after the meeting at the Wanda Metropolitan Stadium in Madrid.

Interviewed after the game, Dudamel clarified that out of respect there was an agreement to receive Ecarri’s visit, as long as he did not publish a photo or video of it, but the representative of Guaidó did not comply with the agreement.

In a video posted on his Twitter account, Ecarri appears giving a speech on behalf of Guaidó in front of the Venezuelan players. Moments later, the deputy Guiadió, self-proclaimed as “interim president” of Venezuela, commented the video of Ecarri to wish success to the selection.

Dudamel informed that he will speak with the vice president and with the president of the FVF, Laureano González, so that the directors are the ones who define whether he continues or not in his position.

“They will be in charge of taking the decision,” he said.

Dudamel’s announcement comes after a convincing 3-1 victory against Argentina, with the star Lionel Messi on the court.

The President of the National Constituent Assembly of Venezuela, Diosdado Cabello, commenting on the incident took the opportunity to congratulate the work of the Venezuelan national team and also of Rafael Dudamel’s and recognized his bravery denouncing the irresponsibility of right wing politicians disrespecting an agreement. He also said that anyone has the right to have their political views and that won’t change the achievements of the team.