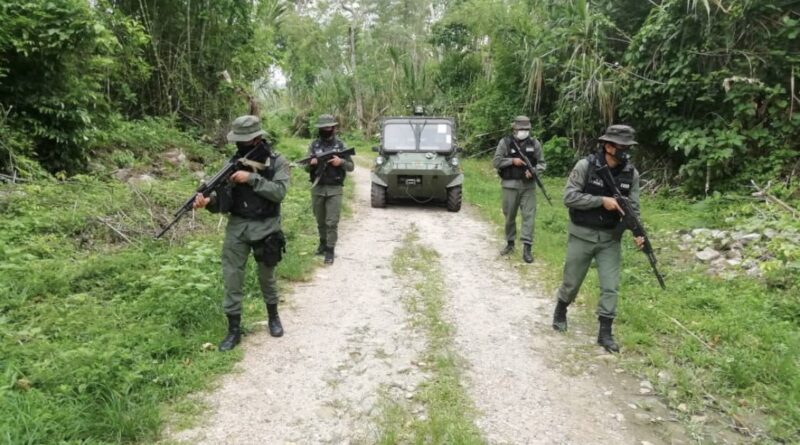 On Thursday, March 25, an investigation and patrol deployment of the Strategic Operational Command of the Bolivarian National Armed Force (CEOFANB) in the north of Táchira state seized logistics material, explosives, ammunition, fuel and vehicles, presumably belonging to Colombian paramilitary terrorist cells that could attack strategic border areas in Venezuela.

The implements were discovered in the Mata de Curo, Morretales, Las Guayas and Quebrada la China sectors of Ayacucho municipality in Táchira state. According to FANB, these materials were allegedly to be used by terrorist units to carry out attacks on border military units and strategic installations.

“In a comprehensive approach, the CEOFANB remains ALERT to confront paramilitary terrorist cells in Venezuelan territory,” read a statement published by the Strategic Operational Command of the Bolivarian National Armed Force in its Twitter account.

CEOFANB added that through intelligence work, “it was possible to verify that the seized material belong to Structured Groups of Organized Crime (GEDO) and Armed Groups Generators of Violence (GAGV).”

Paramilitarism and terrorism promoted by Colombia against Venezuela?
Various sources indicate how, for about 6 decades, the neighboring country has abandoned its border, leaving it to the control of drug traffickers and paramilitary. Recently, members of the Bolivarian National Armed Forces in Apure state had a confrontation with criminal groups seemingly seeking to destabilize the border area, confirming once again that the Colombian State does little or nothing to contain these armed groups that cause violence in both Colombia and Venezuela.

Moreover, at this decisive moment when Venezuela is carrying out operations to combat narco-terrorist groups, international organizations and Colombian media are trying to affirm—without proof—that a cell of the Mexican Sinaloa cartel operates in the Venezuelan state of Zulia. This could be used to reinforce the hypothesis of Venezuela being a narco-state, an allegation routinely used by the US administration. In this manner, certain international bodies can delegitimize Venezuela’s fight against illicit drug business in the national territory and the region, and ignore the actions of the world’s leading cocaine-producing state, Colombia, and that of the largest consumer of drugs, the United States.