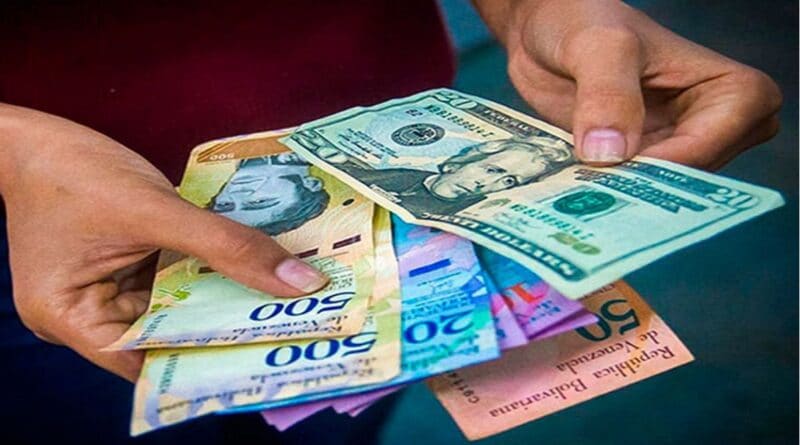 The move represents a legalisation of the de facto dollarisation seen in recent years.

Addressing the nation last Wednesday, President Nicolas Maduro showed off the first foreign currency bank card designed for domestic use, encouraging Venezuelans to open accounts. The Banco del Tesoro’s new debit card will enable users to make daily purchases, while the account will allow them to send and receive local and international transfers or family remittances.

While the state-run bank is the first to offer such a service, private-sector banks such as Banesco and Banco Nacional de Credito, as well as the public Banco de Venezuela, all extended existing hard currency accounts to allow local payments and transfers in January after authorities greenlighted the move. They are expected to unveil similar debit cards in upcoming weeks.

“You can open an account in dollars and deposit 100, 200, 1000 (…) It is a payment system which allows you to use both currencies, [local] bolivars and convertible hard currencies, mainly [US] dollars,” Maduro explained in his address, going on to state that “we already have 20,000 [dollar based] accounts opened” since January. Venezuela’s minimum wage currently sits around 1,500,000 bolivars (US $0.80) a month.

The banking reforms come in contrast to a range of economic measures rolled out by Maduro in 2018, which were intended to “defend” the bolivar, the country’s only legal tender. The measures largely failed, with the currency suffering from posterior devaluations, pledges to peg wages to oil prices not put into practice and the government eventually lifting foreign exchange controls.

Continued inflation of around 4000 percent annually, has caused dollar price tags for goods and services to become commonplace in the Caribbean country, with economic consultant firm Ecoanalítica estimating that over 60 percent of all purchases are now made in the US currency.

Higher dollar-based wages in some private sector jobs and family remittances from Venezuela’s diaspora population have contributed to boosting dollar transactions, as have practical problems with digital bolivar transactions, such as power outages or bank platform technical issues.

The rising dollarisation has been coupled with a historically low amount of local currency in circulation, currently estimated to be around US $420 million. Rapidly increasing prices and bank withdrawal caps have likewise added to severe bolivar cash shortages.

According to Banco del Tesoro, the new banking reforms also look to combat pre-existing shortages of dollar bills, which have been exasperated by closed borders, travel restrictions and a drop in international trade due to the Covid-19 pandemic. Difficulties finding smaller bills or paying fraction amounts will allegedly be solved by digitalising the transactions.

The use of foreign-based digital transfer mechanisms, such as Skrill or Zelle, has also rocketed in recent months, with the latter declaring a 17 percent jump in transactions in the country in 2020. Venezuela is also one of the leading countries in the region when it comes to the use of cryptocurrencies, with Bitcoin recording a new record of US $4.5 million worth of transactions last week. Venezuela’s own cryptocurrency, the Petro, has failed to become an accepted transaction mechanism, however. Such transactions, alongside dollar cash payments, generally go undeclared by businesses and bypass fiscal controls or contributions.

In spite of the de facto dollarisation Venezuela has seen in recent years, Maduro’s government has maintained its official position of protecting the national currency. Nonetheless, liberal reforms which include dollarisation, have been accompanied by a shift in the government’s discourse, with Maduro describing dollarisation as a “release valve” for Venezuela’s economy. The government’s economic policy has likewise involved deregulating workplace conditions and contracts, privatisation and tax exemptions with the goal of attracting foreign investment.

The reforms, however, have prompted strong criticism from a range of leftist or grassroots organisations, including those grouped into the Popular Revolutionary Alternative (APR).

Last month, the Venezuelan Communist Party also took aim at the process, describing the government reforms as part of a “pact with the oligarchy” which “does not benefit the majority of the people.” A number of organisations and figures have called for tighter controls and taxes on foreign currency incomes.

In contrast, a number of economists have coincided with the government in pointing to the necessity of the recent reforms, including Datanalisis’ Luis Vicente Leon.

“In reality, the government is only recognising a practice which already exists so as to give it a more stable legal framework (…) It had no choice, by forcing people to use the bolivar it was only causing an increasing black market for dollars,” Leon told the BBC last month.

The measures could also offset a severe drop in public income caused by US sanctions and a collapsed oil industry by offering greater tax returns on declared dollar transactions, Leon went on to explain.

“Before, [the state] was the owner of all of the dollars which entered the country [mostly through oil sales] and it had the resources to compete with the private sector if it didn’t behave itself. But US sanctions left it without access to hard currency and without international markets, meaning that the private sector is now the only one which can guarantee the supplying of the country,” he concluded.

Featured image:  The use of dollar bills has become increasingly common in Venezuela. (Agencies)