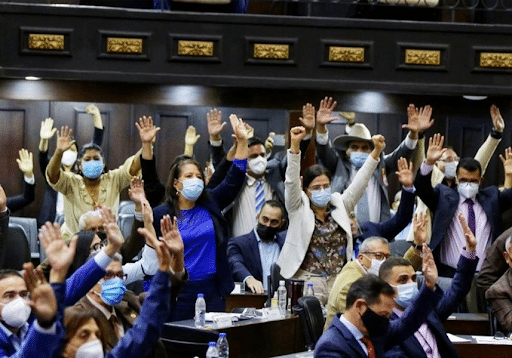 This Thursday, March 11, during a regular session, the Venezuelan National Assembly (AN) approved the laws for Communal Cities and Chamba Juvenil (youth employment) to ensure a better future for Venezuelans. The projects emerged out of debate involving all sectors, and with clear proposals to encourage policies of inclusivity and development.

The deputies explained the importance of these laws for boosting the economy and protecting the population.

“The communal councils are referred to in the same way in Caurimare or in the Catia neighborhood. The communes will be the same in El Cafetal as in any other place. The stigmatization qualifying the laws as ‘communist’ has no foundation,” said Jorge Rodríguez, president of the AN.

The proposal for the Communal Cities Law was presented by deputy Luis José Marcano, who emphasized the law’s vindication of the Chavista legacy.

“In the blue book written in the handwriting of Commander Hugo Chávez, it was suggested that we move towards a more efficient popular organization,” Marcano explained.

At the same time, the numerous benefits of the law were outlined. These include strengthening the structure of a State that protects communal organization.

“The communal cities express the configuration of a new socialist ethic, of a new political model that seeks to transcend the oil rentier scheme.”

Venezuela at the forefront
In this new political era since the parliamentary elections, these laws were forged by legislative work spanning barely two months. With this regulation the country cements its position at the forefront of the region with bold and historic laws.

After five years of betrayal and significant theft, this new directive resumes the institutionalization of the nation within the bounds of political legality.

“To build a space for a new metabolic relationship between society and nature, a new culture, a new ethics, a new morality, beyond possessive individualism,” said Marcano, referring to the communal state as envisioned by millions of Chavistas.

The intense debate revealed that the Chavistas’ work is intended to benefit all people without political distinction, through robust social programs or missions.

“Communal Cities must be at the forefront of the realization of society, and support the decolonization of science and current practices,” added Marcano. “Therefore they must transcend the mechanical sum of Communal Councils and Communes, they must constitute a new spirit, a new truly human subjectivity.”

Next, the second and most important discussion is anticipated, in which each of the articles will be scrutinized and addressed for later approval.