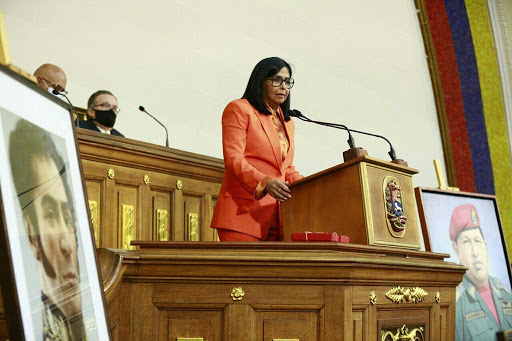 In accordance with article 244 of the Constitution of the Bolivarian Republic of Venezuela, Vice President Rodríguez, accompanied by the 33 ministers of the country, attended the National Assembly (AN) on Tuesday, in order to give the annual address of her management during 2020.

“We have come here as requested by the President, to give an account of what we have done for the people. These are not numbers, they are facts. There is an imperative need to know the roots of history, to know what has been done for the country. We have to look at the past, as Commander Chávez said 22 years ago in this same space,” said Rodríguez.

The official began her presentation by assuring that 53 salary increases have been made during the administration of the government, “not only due to economic necessity but also because of the permanent concern of the Executive and the President to defend the people from the economic war, since the year 2020 was a year of particular cruelty against Venezuela.”

She stressed that the importance of today’s figures are reflected in the recent history of the country. “Here we show substantial differences in basic areas for the Venezuelans, here we see what Puntofijismo did and what the Revolution continues to do, figures supported by the National Institute of Statistics (INE).” She highlighted the importance of the role of the Chavista administration. Before the arrival of COVID-19 in the country, “more than 19 million people were consulted through the Patria System, about the application of effective methods to fight the pandemic. Venezuela has set an example of comprehensive care for the population in the face of the worst pandemic in the history of humanity and the worst economic aggression against our country.”

She assured that despite the economic asphyxia, the country has emerged victorious in the face of the pandemic, compared to the countries that have attacked Venezuela. “It was a year of attacks that sought to get at the heart of our national political life. For the first time in history, oil in the world showed negative numbers, and Venezuela also experienced the worst aggression from the United States. The year 2020 was a year of cruelty at its finest, a multiform war that worsened during this period,” she insisted.

“As the world fought against COVID-19, economic sanctions intensified against Venezuela, making the fight even more difficult,” she added.

Here is shown the seriousness of what this economic attack against Venezuela has meant, she said after mentioning the figures for the contraction of the Gross Domestic Product, comparing it with countries that have suffered bombing attacks in disastrous wars, versus the new soft war that seeks to suffocate countries with strategies of economic suffocation through sanctions and blockades. She stressed that in 2020, “the United States sought to suffocate the economy by preventing oil production. 2020 was also a year of the dispossession of our assets, all this in the middle of the pandemic. It was a year of attacks, sabotage, a year that sought to destroy the national economy.”

The vice president recalled that due to the blockade and sanctions imposed by the United States, eight children who were part of the CITGO transplant program lost their lives this year, due to lack of treatments that were impossible to acquire due to the imperialist policies that stripped the country of its CITGO assets.

“Eight children lost their lives because the CITGO transplant program for children who needed urgent health care was stripped from Venezuela. We owe it to these children to overcome the blockade; fight without rest,” she said.

CITGO resources, through the Simón Bolívar Foundation, were originally intended for patients with chronic diseases, who needed medical technology or treatments abroad due to their severity, with prior mediation by the PDVSA Health Commission.

She reiterated that in 2013, Venezuelan oil production stood at 2,368,000 barrels/day and since January 2016 it began to decline after crude prices fell to $30 per barrel.

The decline was exacerbated amid suffocation until January 2017 when the Trump administration imposed illegal coercive measures to push production just below 1,400,000 barrels/day.

Then, in January 2019, once again the government of former President Trump applied illegal sanctions, this time against the state oil company PDVSA, which led the country to close 2020 with a production of only 339,000 barrels/day.