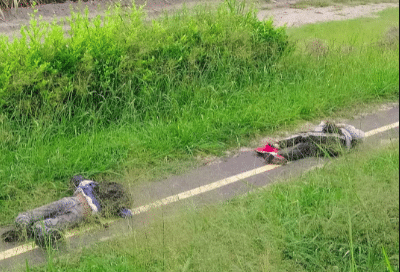 Venezuela’s Foreign Affairs Minister, Jorge Arreaza, reacted strongly to the discovery of the bodies of young protesters during the national strike in Colombia, emphasizing that “the world must responded” to the state violence that has been taking place in that country for several weeks already.

Through his official Twitter account @jaarreaza, the senior Venezuelan official wrote: “From #Venezuela we have been warning for years about the seriousness of the situation of state violence and of all kinds of paramilitary groups in #Colombia. What has happened in recent weeks is nothing more than a magnification of daily events. The world must respond.”

Arreaza’s tweet was a response to an post shared journalist Patricia Villegas, president of Telesur, of a photograph of two bodies, in which Villegas wrote that it was “confirmed that these two boys were protesters in the national strike in Colombia. They were in the so-called frontline of Siloé, La Nave, in Cali.”

RELATED CONTENT: Duque Denies IACHR Entry to Colombia, Social Media Users Remind Him of When he Asked for IAHCR Intervention in Venezuela

Since April 28, 2021, demonstrations and strikes have been organized across Colombia in protest of the tax and health reform project proposed by the government of Iván Duque, joining social unrest manifested prior to and during the COVID-19 pandemic, and accentuated by the disproportionate use of force by Colombian authorities.

Missing persons (desaparecidos)
News agencies and human rights organizations have confirmed the deaths of dozens of demonstrators in addition to hundreds who have been reported missing and yet to be accounted for, as is often the case in these types of incidents. The Pro-US Inter-American Court of Human Rights (IACHR) has even condemned the serious human rights violations in the context of the protests. Meanwhile, President Duque has refused to accept an immediate IACHR working delegation into Colombia.

While it states that 290 missing persons have now been found, the Colombian Attorney General’s Office nevertheless reported 129 individuals unaccounted for, as of May 24. However, the data provided by judicial entity is contradicted by other organizations such as the Center for Studies Peace Development (INDEPAZ) and the Ombudsman’s Office.

Recently, White House spokesperson Jen Psaki urged Colombia to locate the missing persons, but downplayed the demand for investigations into what are evidently systematic human rights violations, instead welcoming the initiative of the Government of Iván Duque to “investigate complaints of abuses against protesters.”

Mass graves, bodies found in Cali rivers, and the role of the police
A video circulated on social media networks showing men allegedly dumping bodies into the Cauca River from a police truck. The incident took place in Cali, in the Colombian department of Valle del Cauca, the epicenter of the demonstrations in Colombia. Reports of mass graves have been circulated widely on social media networks, and this would not be a new phenomenon for Colombia.

In recent days, Cali alderwoman Ana Erazo expressed concern through her social media accounts about the reports of discoveries of dead bodies in rivers.

“Extremely painful videos have reached me concerning bodies found in rivers,” she wrote. “What we feared is beginning to happen and my soul hurts. This is heartbreaking.”

In addition, she urged the municipal authority of Mulaló , a town in Valle del Cauca, to form a commission to investigate complaints of possible mass graves used to bury those killed by state terrorism, victims of the brutal repression of strikers and demonstrators.

Featured image: Photo of two dead bodies confirmed to be protestors in Colombia. Colombian authorities are committing human rights atrocities against peaceful protestors under the protection of mainstream media and the US government. Photo: courtesy of Telesur.