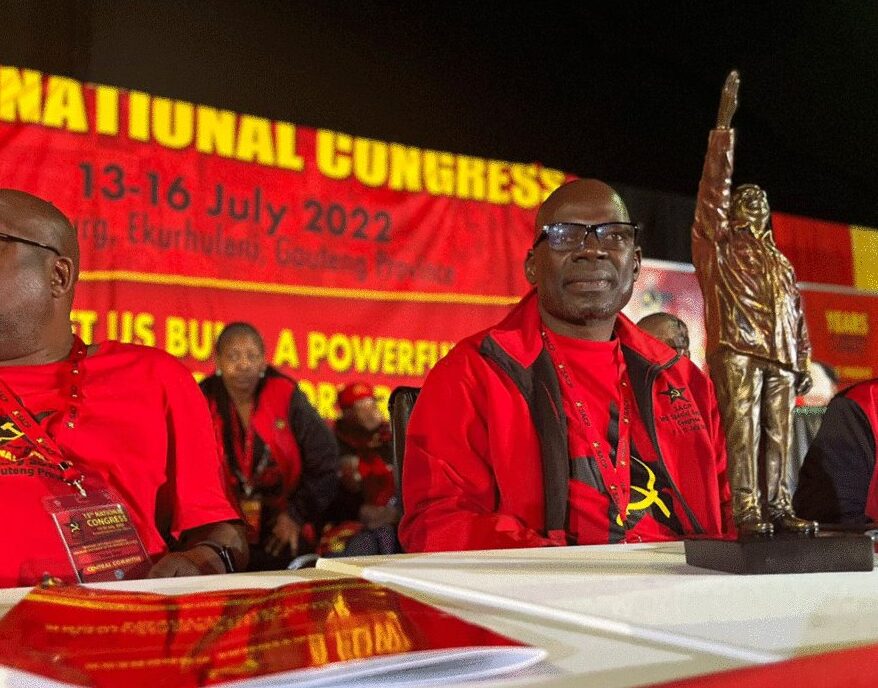 South African Communist Party leader Solly Mapaila (right) with a statuette of Hugo Chávez, gifted by the PSUV, sitting with other members of SACP. Photo: Twitter/@PartidoPSUV

Members of the national leadership of the United Socialist Party of Venezuela (PSUV) are participating in the 15th Congress of the South African Communist Party (SACP), which is being held in the capital of South Africa, Johannesburg, on the occasion of 100 years since the founding of SACP.

Jesús Faría, member of the vice-presidency of International Affairs of PSUV and participant in the Congress, highlighted his admiration for the South African Communist Party and the important role it has played in the struggle against imperialism.

“We have been morally strengthened by this congress, by all the lessons and experiences that we have been gathering from the South African people and this party,” said Faría.

He added that PSUV’s participation in the meeting has served to broaden its platforms of anti-imperialist struggle.

In the event, PSUV members delivered a statuette of Commander Hugo Chávez to the leadership of the Communist Party, which co-governs South Africa together with the African National Congress and the Congress of South African Trade Unions (COSATU).

South African leader Moses Kotane, former secretary general of SACP, was recognized in an event with South African songs, a homage similar to the one once received by Commander Hugo Chávez when he visited South Africa.

At that event Kotane emphasized the importance of Africanizing Marxism, that is, adapting the essence of the proletarian struggle, the lesson of the Paris commune, to inspire and strengthen the ancestral experience of struggle of the African peoples.

He stated that the objective of all progressive forces is to put people before profits, the environment before private accumulation, and international solidarity to confront inequality and imperial militarism.

In Africa, 50% of the economically active population is unemployed. There are still 14 countries with a COVID-19 vaccination rate less than 10%, which has been denounced as vaccine apartheid because rich countries hoarded vaccines far in excess of needs of their populations.

It was also announced that on Saturday, July 16, Solly Mapaila will be declared the new General Secretary of the South African Communist Party.