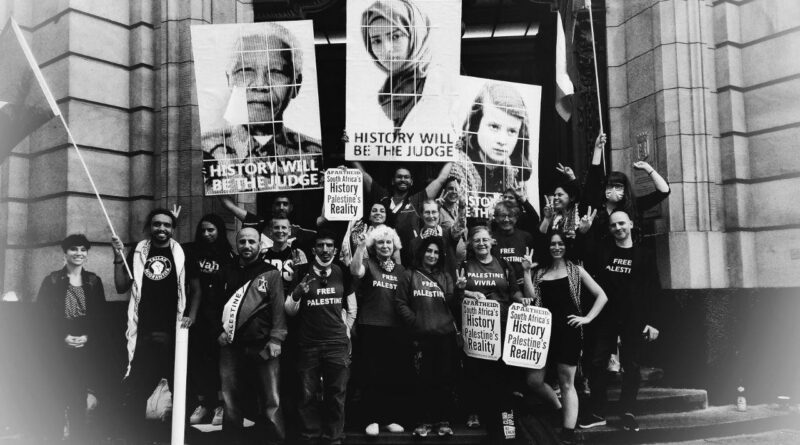 Apartheid crimes are put in the spotlight.

Today concluded a three-year saga which started during our disruption of war criminal and apartheid representative MK Aliza Lavie, back in June 2017. The trial ended in victory!

Our win is first and foremost in promoting an unapologetic discourse of resistance to the criminal Israeli apartheid regime in Berlin — the last standing bastion for Zionism. Throughout the trial we insisted on making clear statements that emphasize our legal and moral obligation to oppose Israeli crimes against humanity.

#Humboldt3 – The real trial that took place today: The people’s tribunal against Israel outside of the Berlin criminal court. @swilkinsonbc @ronnie_barkan pic.twitter.com/JcQ1miZuzM

We also claim victory because Majed and Ronnie were fully acquitted, while Stavit received the minimum possible punishment, probably to save face for the prosecution.

#Humboldt3 trial update: Judge rules to drop the trespassing charges against Majed and myself. @Stav_Si is still charged with assault by the prosecution. Even though the judge is not in favor he is obligated to follow through on these charges, currently requestioning Spaney.
— 🗣️📢 barkan.crypto (@ronnie_barkan) August 3, 2020

The trial started with the judge negating the trespassing charges altogether on the basis of formality flaws by the prosecution. He suggested that the prosecution will drop the case in its entirety. The state prosecutor needed to consult with her superiors, this ritual repeated itself three times throughout the day, where the judge encouraged her to drop the case and each time she was instructed by her bosses to carry on no matter what.

After five hours of deliberations which included slander, lies, contradictions, sexism, admission of testimony coordination and self incrimination of physically assaulting Stavit — the judge ended up siding with the state by handing in a guilty verdict albeit keeping it to the bare minimum.

The prosecution refuses to drop accusations of assault against me. I sit and listen as the Zionist witnesses describe me with a series of misogynistic tropes. They are so afraid of people speaking against apartheid that they turn to good old chauvinism. #Humboldt3

#Humboldt3 trial continues.. Spaney of DIG who claims to have been assaulted by @Stav_Si even though it’s not at all clear how, will now give his testimony (in the previous time we showed a video proving that he was lying). Continuation of the trial depends on his testimony.
— 🗣️📢 barkan.crypto (@ronnie_barkan) August 3, 2020

Why was Stavit found guilty?
For banging on the door of the lecture room, insisting on re-entering to find out the details of the person who had just punched her in the face. Thanks to one of the Zionist witnesses who inadvertently showed the judge a video that he had never published before — the punching was clearly visible — giving immense credibility to Stavit’s testimony while discrediting each and every Zionist witness that testified against us.

Another victory that we are deeply grateful for is the overwhelming show of support and solidarity from across the world. From vigils outside German embassies, to a successful crowdfunding campaign in order to cover our mounting legal fees, to the coming together of many supporters who flew in to Germany especially in order to attend today’s trial and actively participate in the people’s tribunal outside the courthouse.

#Humboldt3 trial continues, I just read my opening statement and @Stav_Si is now reading hers. The prosecution is not very happy to go against the judge’s advise, but it is somehow forced (by force majeure?) to not retract assault charges. pic.twitter.com/XYrtYMhW48
— 🗣️📢 barkan.crypto (@ronnie_barkan) August 3, 2020

The struggle against apartheid continues on all fronts!