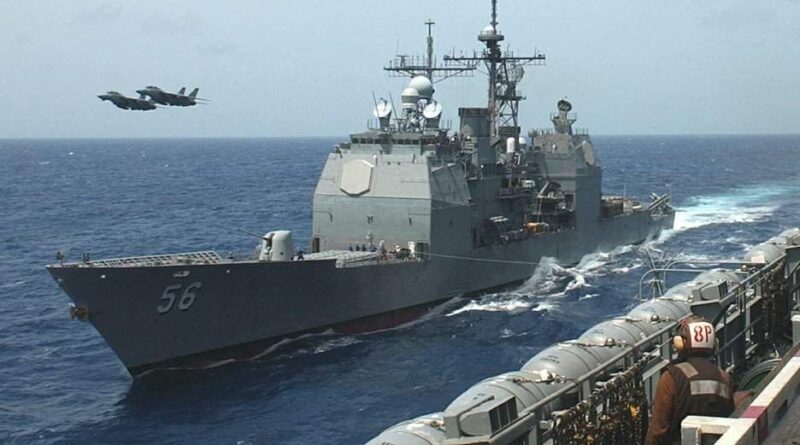 US newspaper The New York Times reported that Donald Trump’s regime carried out a secret mission in Cape Verde last November, the African island nation where Venezuela’s diplomatic special agent, Álex Saab, was kidnapped after being illegally detained by authorities fulfilling a request of the United States that violated his diplomatic immunity.

According to the newspaper, the secret mission involved the USS San Jacinto cruiser of the United States Navy, supposedly to “prevent any maneuver by Venezuela and Iran to achieve the release of Saab,” who has been detained on Cape Verde since June 12. But some Venezuelan analysts agree that the real objective may have been to try intimidating Cape Verdean authorities, or to conduct an assassination or abduction attempt, according to Orinoco Tribune.

The information was revealed this Tuesday by propaganda outlet The New York Times, which explained that the operation was launched after the Venezuelan diplomatic agent was kidnapped at the unsubstantiated request of Washington.

The secret mission, says the US outlet, was carried out despite the consistent objection of former Secretary of Defense Mark Esper, who for months refused to send a Navy ship to Cape Verde, considering it was a misuse of US military power.

“The stealthy arrival of the San Jacinto, a powerful Ticonderoga-class missile cruiser, to the island country coincided with the moment when Esper was fired by Trump, in early November. Christopher C. Miller, the current US Secretary of Defense, quickly approved the deployment of the warship from Norfolk, Virginia. With his approval, the ship crossed the Atlantic to closely monitor any movement or maneuvering around Saab,” the newspaper added.

The New York Times disclosed that Esper—from the beginning—remained firm in his position: if Saab’s extradition was achieved, it had to be carried out without the intervention of a United States Navy warship. Despite this, the government sent the Coast Guard ship Bear to Cape Verde in August. Commander Jay W. Guyer, a spokesman for the Coast Guard, argued that the vessel was used in a joint patrol with the Cape Verde Coast Guard “to counter illegal, unregulated and unreported fishing.”

The New York Times pointed out that last month two West African countries, at the request of the US State Department, denied an Iranian plane bound for Cape Verde permission to refuel at their airports. Officials indicated that the plane might be carrying Iranian spies, commandos, or perhaps just lawyers to overturn Saab’s extradition. Given the refusal of these nations, the plane flew back to Tehran.

Supporters of the Navy’s deployment, such as Elliott Abrams, the United States’ special envoy to Venezuela and Iran, stressed that the presence of the San Jacinto—with an operating cost of $ 52,000 a day—had deterred any attempt by Venezuela and Iran to operate on Cape Verdean soil in support of Saab, presuming that these countries conduct international affairs like the criminal United States.

The Pentagon’s Africa Command, however, did not recognize the ship’s secret mission, although it did recognize its presence in the country. According to The New York Times, Kelly Cahalan, a spokesperson for the Command, said the ship was sent to Cape Verde “to combat illegal transnational maritime activity” in the region.

The secret mission concluded last week, following the San Jacinto’s reception of an order to return to Norfolk to ensure that the 393 crew members were home for Christmas and New Year’s. A senior Pentagon official stated that it hasn’t been decided whether or not they’ll send another Navy ship after the holidays.

Venezuelan diplomatic envoy Saab was arrested on June 12 when his plane stopped to refuel at the Amilcar Cabral International Airport on the Cape Verdean island of Sal.

Featured image: USS San Jacinto, the tenth ship in the Ticonderoga-class of guided missile cruisers and the third ship in the Navy to bear the name of the historic battle, sent to Cape Verde for intimidation or for an abduction. Photo courtesy of navy.de.