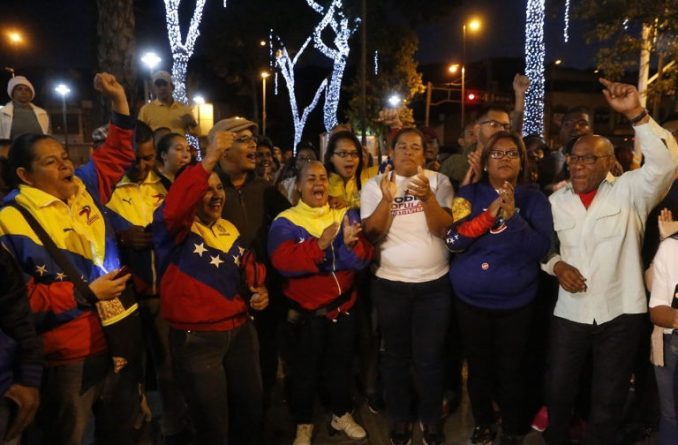 With the “toque de Diana” and fireworks , Caracas went to the democratic election day of this Sunday, December 9, to choose the representatives to the municipal councils across the country. From Plaza Sucre in Catia, members of the community invited citizens to exercise their right to vote with an activity full of joy, fireworks and the touch of diana, which has been a custom in the electoral processes carried out in the country in recent 20 years.

In addition, Plaza O ‘Leary, in the center of Caracas, gathered from 5:00 a.m. this Sunday the revolutionary forces to joyfully and rocketically raise the call for people to exercise their right to vote freely in the elections of municipal councilors.

In a contact with Venezolana de Televisión, Carmen Zerpa, one of the candidates for the United Socialist Party of Venezuela (PSUV), said: “We are prepared as always, people got activated from 5:00 in the morning with this appeal to the people to exercise their right to vote. ” She remarked that with this 25th election during the revolution, it is confirmed that there is participatory democracy in the country. Another candidate, Patria Zapata, said: “For every aggression against the homeland there is a people mobilized to vote. I invite you to participate to tell the whole world that here there is participatory democracy. ” Jazmín Chacaré, also an aspiring alderwomen, highlighted the transparency of these processes under the direction of the National Electoral Council (CNE) within a civic party in which the people are being called to exercise their right to vote freely.

Francisco Quevedo, executive secretary of the PSUV, said: “Let’s go out and defend our democracy. Today we reaffirm the commitment with Comandante Chávez “·.

More than 20 million Venezuelans are called to exercise their right to vote in the municipal elections this Sunday, where 2,459 aldermen and alderwomen will be elected with their respective alternates for the 2019-2022 term.

In this election, the number 25 since 1999, a total of 1,073 councilors will be elected by a nominal vote, 685 by a list vote and 69 municipal indigenous representatives in 14,382 voting centers, where 28,773 voting tables have been set up in 702 jurisdictions of the 335 municipalities of the country.