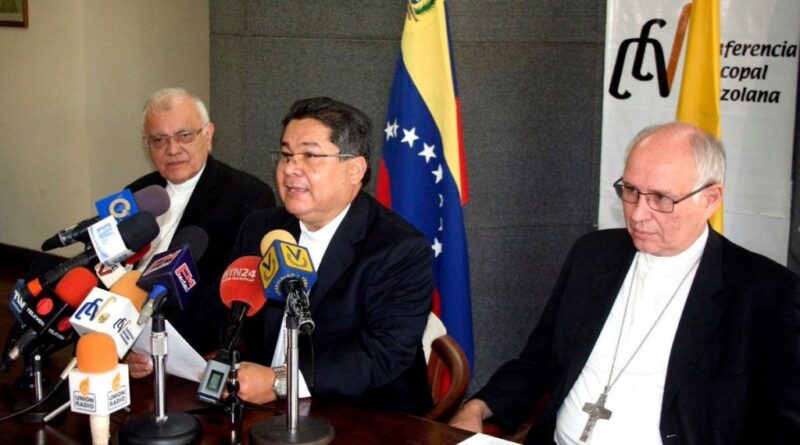 This Tuesday, August 11, the Venezuelan Episcopal Conference (CEV) reappeared as an actor on the Venezuelan políticas scene, in congruence with its behavior of the last 20 years. Only, this time, they have done it against the current of a group of Venezuelan anti-Chavista parties.

The Presidency of the Venezuelan Episcopal Conference issued a statement regarding the parliamentary elections to be held this year in Venezuela, distancing itself from the anti-Chavista tendencies that call for (voting) abstention. On the contrary, they called on the opposition actors to participate in the elections to be held on December 6.

In their statement, they described as “immoral” any maneuver “that obstructs the political and social solution of the real problems present in the country.” They appealed to the “democratic vocation” of the Venezuelan people and outlined the electoral route as a “peaceful and rational” way out of what they describe as a political crisis.

Meanwhile, they lashed out at the political parties that have said they will not participate in the race, pointing out that “it is not enough”, because “mere abstention will increase the political-social fracture in the country and hopelessness in the future.” They urged anti-Chavismo to “seek solutions and generate proposals” for their followers.

“This decision to abstain deprives Venezuelan citizens of a valid instrument to defend their rights in the National Assembly. Not participating in the parliamentary elections and the call for abstention leads to immobilization, the abandonment of political action and renouncing a show of one’s own strength,” said the institution representing the Catholic congregation in Venezuela.

Additionally, they recalled that the abandonment of the parliamentary elections in 2005 did not bring any positive results for anti-Chavismo.

The CEV’s call to participate in the elections is also accompanied by remarks and questions about the political mechanisms that had to be used to form the new National Electoral Council.

It is worth remembering the recent judicial advance undertaken by the Venezuelan Supreme Court of Justice (TSJ) to appoint the electoral authorities, in light of the parliamentary stalemate that was caused by the wing favoring deputy Juan Guaidó in the National Assembly (AN), who immobilized any agreement in order to boycott the elections and declared himself in office indefinitely, as would later be endorsed (in evident orchestration) by the US government, which indicated the “permanence” of the “interim president” in his “position”, even if parliamentary elections in Venezuela are held.

Political saturation approaches the Venezuelan context from different sides and the boycott of the parliamentary elections is a component with the quality of a critical nexus in the American agenda to take Chavismo out of power.

But Washington’s roadmap for Venezuela, which continues to loop, is encountering reactions not only within the oil producing nation. Behind-the-scenes negotiations are also taking place, this time and almost simultaneously with the statement from the Venezuelan clergy, with the European Union (EU), on behalf of their High Representative for Foreign Affairs, Josep Borrell.

In a statement, the official stressed that he was in communication with Chavismo and the Venezuelan opposition, taking steps to create new “guarantees” for “free and fair” parliamentary elections.

He indicated that extending the electoral deadlines is on the table, so that Chavismo meets new demands from the opposition and to coordinate the possibility of an “electoral observation” mission with the EU. Along the same lines, according to Borrell, Chavismo would be asking them for an electoral “accompaniment” mission.

It is essential to specify that the EU’s tones in the handling of the Venezuelan case have seemed like a weather vane, moving according to the winds of its internal inertia and those that blow from Washington, hence all the apparent efforts made by the Europeans for the elections to take place could weaken, without sabotage and abstentions, if the Americans again prevail by lobbying the EU.

Meanwhile, for the Venezuelan opposition, the possibility of self-relegation from the parliamentary elections presents new dangers. The Episcopal Conference suggests in its statement that the opposition would be without political representation on the national scene, with the formal departure of Guaidó from the political arena, no matter how much Washington supports it.

The foreseeable future for this part of the opposition, in this scenario, would be their definitive displacement to political self-exile, which, it is known, has yielded them enormous economic dividends for the raising of money and assets withheld from the nation and now put in the hands of anti-Chavismo through US auspices. These are essential elements to explain why part of the anti-Chavismo does not want to be electorally measured.

In a recent hearing before the Senate of his country and in the midst of ragged explanations of the failure of Trump’s regime change operation in Venezuela, Democratic Senator Chris Murphy remonstrated with Elliot Abrams, warning that Guaidó and the opposition would not participate in the elections, which which would leave Washington in the “shameful” position of supporting someone who “does not control the government, does not control the Armed Forces and who will not have any political office” in January 2021.

This indicates that the multidirectional pressures faced by the opposition to go to elections have an apex in the “concerns” of the Democrats, who understand Venezuelan politics as a swamp, with international consensus increasingly broken around the strategy of blockading the country and supporting Guaidó.