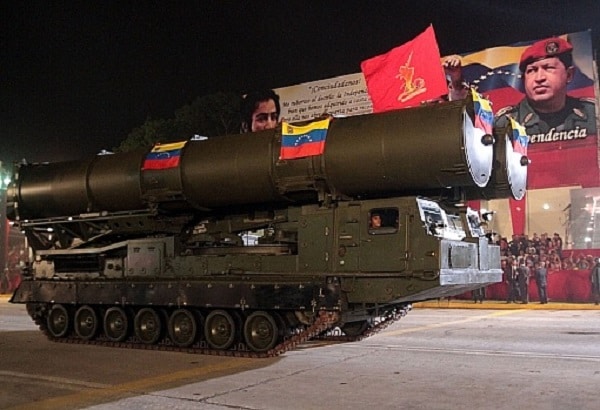 Defeating Venezuela has so far been an unattainable goal for the United States, despite having deployed its entire arsenal of unilateral coercive measures, blockades and threats.

There are several reasons for the lack of achievement of that goal, but one that should not be forgotten is the strategic turn the country took, under the leadership of Commander Hugo Chávez, in the area of military equipment.

Venezuela stopped depending exclusively on the equipment and weapons of the American, European and Israeli military industrial complex, which has prevented the governments of these military powers from putting the country in a situation of defenselessness, being unarmed or with its military systems in great danger or low operability, something they have achieved in sectors as fundamental as oil, electricity and water supply.

If Venezuela had not changed its suppliers of military equipment by the time it could, it would have been defeated and probably invaded several years ago, since all its defensive equipment would have been practically rendered useless.

The response capacity of Bolivarian Military Aviation is today, quite the contrary, a factor to consider in war games.

The Russian Sukhoi SU-30MK2 fighters, the Chinese Hongdu K-8VV attack aircraft; the Chinese-Pakistani Hongdu JL-8s light attack and training aircraft; Shaanxi Y-8 transports (made in China and based on the mythical Soviet Antonov AN-12) and Russian cargo helicopters capable of anti-tank warfare Mil MI-17 V5 (baptized in Venezuela with the indigenous name Panare) are of high value in the regional battle scenarios that would be considered before a possible attack against Venezuela.

The FANB, in its Army component, also has other Russian models, such as the Mil MI-26T 2 (a heavy transport helicopter, called Pemón) and the Mil-MI 35M (attack helicopter, named Caribe).

It is a radically opposite picture to the one that would have existed if the aerial component were depending exclusively on the technology and spare parts of American equipment, such as the F-16 fighters, the Hercules C-130 transports and the Superpuma and Cougar helicopter gunships , all subjected to embargos of spare parts, updates and repowerings.

Russian and Chinese-made aircraft have also taken the place of the French Mirage fighters and the American Bronco OV-10 observation and light attack aircraft, discontinued prior to the rise of the coercive measures.

The other great defensive augmentation for Venezuela, a result of the break with American military tutelage, are the Russian anti-aircraft, anti-missile and anti-ship systems. These are several heavyweights: the 9K37 Buk; the 4k91 S-125-2M Pechora; and the 9K81M S-300 VM Antey 2500. This panoply places Venezuela on the list of countries with the best anti-aircraft defense in the region.

These large systems, which are mobilized on wheeled or tracked trucks, are complemented by the ZU 23-2 anti-aircraft automatic double cannon, which is of the towed type; and with the portable anti-aircraft system IGLA-S , also Russian, equipped with a high speed of mobilization, which has among its users trained personnel from the Bolivarian National Militia.

A cornerstone of military autonomy against the US and the European Union is the AK-103 and AK-104 combat rifle, which replaced their equivalents, the FAL, of Belgian origin, for decades the standard assault weapon of all Venezuelan military forces. Meanwhile, the Russian Dragunov sniper rifle, also incorporated during the Chávez government, is complemented by the Catatumbo, manufactured by the Venezuelan Anonymous Company of Military Industries.

Field artillery systems have also undergone Russian renewal. Thus, the Bolivarian Army has rocket launchers, artillery and mortars, both self-propelled and towed from the Eurasian ally. They are the BM30 Smerch, BM21 Grad, 2S19 Msta-S and 2S12 Sani systems.

The use of all these equipment and weapons not dependent on the adversary, is guided by the doctrine of the Comprehensive Defense of the Nation, which develops the hypothesis of asymmetric warfare. This has the objective of dissuading or, in the event of a confrontation, retaliating against a better endowed and technologically superior military enemy.

This paradigm is based on Mao’s people’s war and on a strengthening of conventional military capabilities in the defense of airspace and in mechanized warfare. The equipment and weapons acquired since the hegemony of the US and Europe in Venezuelan military purchases was broken are perfectly aligned with these approaches.