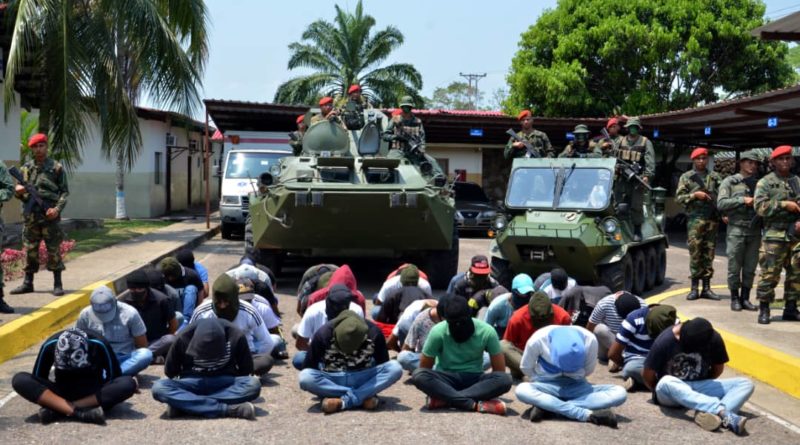 The Táchira state protector, Freddy Bernal, reported that, in a joint operation with the Bolivarian National Armed Forces (FANB), 37 members of the Colombian paramilitary group Los Rastrojos were arrested, and 650 kilograms of explosives were seized.

Bernal explained, through his Twitter account, that this was “the hardest blow to the criminal structure of Los Rastrojos in logistics,” and that the explosives seized include “gunpowder and explosives from the Colombian military industry.”

They confiscated “detonating cords, cables and instruments to prepare up to two thousand homemade bombs, in what was the preparation of a terrorist wave against the Bolivarian National Armed Forces and against the people of Táchira.”

In a video, Bernal explained that Operation Bolivarian Shield 2020 threw, in a month of operations, 37 paramilitaries from Los Rastrojos detained, flagrantly in possession of weapons, uniforms and equipment of the Colombian army and a total of 12 members of this criminal organization were dispatched by the FANB.

He also reported that a laboratory for the processing of cocaine was dismantled, with 11 thousand liters of acetone, a kitchen and ovens, as well as 400 thousand liters of gasoline in clandestine tanks, more than 50 vehicles including trucks, vans, motorcycles and even ambulances.

In a month, half a ton of narcotics have been seized, including marijuana, cocaine and heroin. He also announced the seizure of Colombian military uniforms, vests, backpacks and combat gear of that country, which indicates the “direct participation of the Colombian Army” in the logistics of criminal groups.

The cove was found in the mountainous area of the Ayacucho municipality, Guaramito area, Mortales sector, according to a report from AVN.