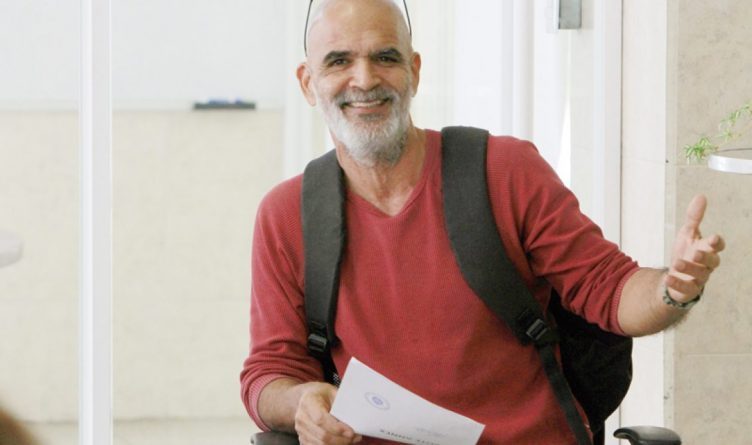 Lives socially and politically in the barrio 23 de Enero. “Garitero” they call him. Armed with solidarity, enthusiasm and passion to always defend the revolution.

– Is the barrio’s language more revolutionary than the one from the wealthy neighborhoods?
-Fuck, I believe that the revolutionary language is the love of our country, of our Caribbean revolution, of this process that summons us all and all of us who feel it to the bone. That Chavista lyric remains, moves forward, makes us have a common code indecipherable for the enemy, a single voice in a single struggle, a single identity to defend what we are building or creating and what Chávez left us to take care of. The barrio is the city, my man. In its daily life and permanently mobilized, it fills the city from dawn until it gets dark or ’til the electricity is taken away from us. This was demonstrated on the 11th, 12th and 13th of April 2002, days when the barrios bounced back and did not eat the counterrevolution’s narrative and threw themselves into the streets. The voice of the barrios was the first to be raised.

-When they say that we are at war, for the “23 de enero” barrio, which has always been at war, is that news?
-We do not get sleep in the barrio, we do not dream it, we do not go in for show business, neither on January 23 nor in any other barrio. We are one face. Go to the Cota 905, La Vega, La Pastora, Lídice or Carapita so you can see active barrios. It’s true, we were born at war. When we have not been at war, my pal, defending, on alert?

Now, if you talk to me about this scenario where they threaten us, block us, besiege us and want us to confront each other, well, we are even more radicalized and organized, in our own way, of course, with our own codes. I can not tell you more, because as we say in the neighborhood: “The routine is not revealed to the enemy.” Our neighborhoods are trenches that we know to the inch level, my man. Small Vietnams for the enemy. Stairs, alleys, streets, hills, are our common place. And with the popular organization that woke up with Chávez commanding and now Nicolás at the helm, there is no hollow that we do not master.

Look, when the water crisis occurred, as a result of the terrorist attack on electricity, in the barrio we activated streams, springs, wells of our sectors, because we knew where they were. Because they are ours. Also, what would the north know about our culture of storing water permanently? Who the hell stores water in times of peace? We have always been at war.

– Why is it that the opposition is so afraid of the word “colectivos”?
– Of the word only? Ha. ha ha, no, my man, we exist, we are not only a word, and they know it. We are real people who get activated when necessary. Not only the “colectivos”, but all the organized people, which is really “the collective”. They are asking for an invasion, and they can not hear a motorcycle because they shit themselves. The “colectivos” are pure love, ha, ha, ha.

RELATED CONTENT: A Chronicle to Define What the “Colectivos” Are in Venezuela

-The electric war, the water war, media warfare, psychological warfare, economic war, the fourth generation war, how do you face so many wars in the barrio?
-Look, this people has built its barrios out of nothing. We have built them collectively because it is in the barrios where that hand of our workers is. Electricians, plumbers, masons, carpenters, craftsmen, artisans of life, all are from the barrio, and chavistas, for real. Man, I always remember the barrio where I grew up in Los Frailes de Catia, Macayapa, up hill building bridges so that the ravines did not isolate us. Creating stairs to reach the “ranchos” and building retaining walls out of nothing, so that the hill would not fall on us. Alleys, tanks, wiring houses for light. Those structures are still there. How can we not resist, if we are pure resistance? Caribes, my man.

-There is a Cuban song that says: “There is fire in the 23”, when is there fire in the 23?
-In the barrio there is always a candle. They are candelosos, then. That of “Hay fuego en el 23” was born from when Arsenio’s ranch was being burned – around the fifth floor of building 23 East, on 110th street, between Madison and Fifth Avenue in New York, a small ranch then, in any neighborhood, and people shouted “there’s fire at the 23rd Street 110!”, it went on to identify one of our most emblematic barrios in terms of resistance and fightback: the 23 de Enero parish. On the “23 de enero” there is always fire, and now with our eternal commander of the revolution watching us from the Cuartel de la Montaña in 4F, even more so. Now, it is not only on January 23 the only combative and fighting barrio that forms the popular security rings of Miraflores, symbol of our power, are all the barrios of Caracas and all over Venezuela. In them there is fire, a permanent candlestick called Chavismo, our identity. When they want, we will be ready waiting for them.