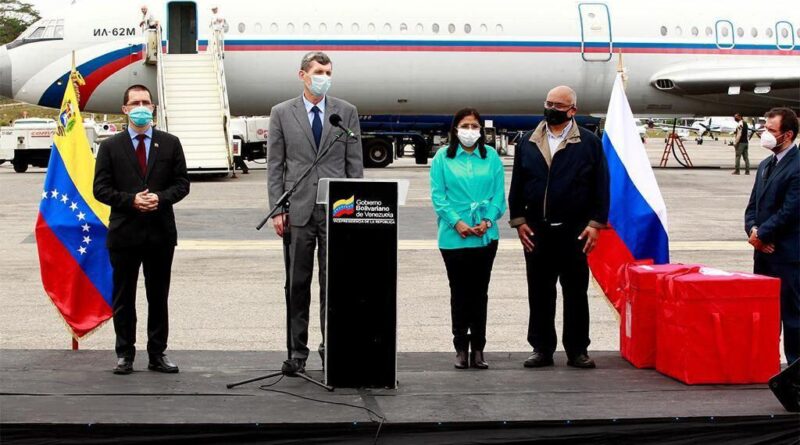 Venezuelan Minister for Health, Carlos Alvarado, highlighted this Sunday that to date none of the more than 120 people in Venezuela who have received the Sputnik V vaccine or placebo during phase III of clinical trials has had an adverse reaction, although immunity to COVID-19 does not develop in the same way in everyone.

During the TV show Here with Ernesto hosted by the journalist and Minister for Culture, Ernesto Villegas, he asserted: “We will have a study of 2,000 patients; out of whom 1,500 will receive the Sputnik V vaccine and another 500 will receive the placebo injection. That was the agreement with the Russian Federation for the phase.”

He explained that in this trial, the first dose of the vaccine is administered on day 0, and 21 days later the second dose is due. “To date no adverse reactions have been observed in any of the volunteers,” he informed.

The first batch of the Russian Sputnik V vaccine arrived in Venezuela on October 2, and almost three months later having vaccinated only 120 subjects out of 2000 reflects at least inefficiency in the handling of this very important matter, according to an expert consulted by Orinoco Tribune.

Minister Alvarado expressed that compared to some Latin American countries, Venezuela has been delayed in receiving the vaccines and equipment to carry out the phase III trials due to the strict protocols of the Gamaleya National Center for Epidemiology and Microbiology (developer of Sputnik V), which requires the receiving country to have exactly the same equipment and machinery used in that research center.

He affirmed that clinical trials are still in process and when this phase of the trials ends, mass vaccination will be carried out. “As the president of the Bolivarian Republic of Venezuela, Nicolás Maduro, has envisaged, mass vaccination is expected to begin in April,” he reiterated.

The expert consulted by Orinoco Tribune suggested that more information should be demanded from the Venezuelan government regarding the delay in the phase III trials, given the fact that many countries in the region are about to start mass vaccination before the end of the year.

The head of the Health portfolio specified that there is currently a world vaccine war: “We in Venezuela have three clearly defined options: the Russian vaccine, the Chinese one and through the Kovax fund, which is linked to the World Health Organization (WHO) for the provision of vaccines around the world.”

Alvarado added that Venezuela has offered to contribute 18 million dollars to the Kovax fund, but as a result of the illegal blockade by the United States government, it has not been able to release those resources.

“That is why we continue to denounce the criminal blockade by the US government. We have not been able to pay the Kovax fund to purchase vaccines and that negatively impacts the Venezuelan people,” lamented the Minister for Health.

President Nicolás Maduro had earlier explained that the country was not going to be able to acquire the Pfizer of Moderna vaccines as a direct result of the illegal and criminal blockade imposed by Washington against the Venezuelan people.