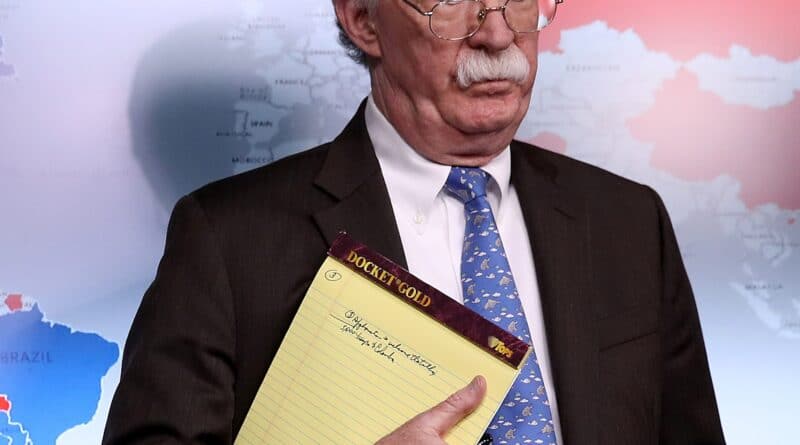 Former White House national security adviser and one of the main promoters of the maximum pressure policy against Venezuela, John Bolton, assured that the absence of “a solid position” from the United States puts the “unity of the opposition” at risk, in terms of the so-called “interim government,” reported the official US propaganda agency Voice of America (VOA) this Tuesday, December 7.

“Without stronger American support, how long could the opposition hold together?” asked Bolton, as quoted by VOA. “Look, this is politics. It is inevitable in a sense. But I think that, in part, it is due to the lack of a solid position of the United States against Maduro, both at the end of the Trump administration and at the beginning of the Biden administration.”

Minimizing the corruption scandals and internal contradictions generated around the so-called “interim government,” in the face of what spokesmen such as Julio Borges and Henrique Capriles have described as “failure,” Bolton insisted that everything depends on an order from the White House.

RELATED CONTENT: Elliott Abrams: If Opposition Decides to Reform or Eliminate ‘Interim Government,’ We Must Support It

“I don’t want to underestimate the problems the opposition has, but my point is that a good part of the problem is caused by the United States, when our support weakened,” said Bolton. He pointed out that the opposition’s participation in the elections, and in a dialogue with the government of President Nicolás Maduro, are a consequence of the absence of a strong position from Washington.

“The arguments to do things like negotiate with Maduro, which I think is silly—he will never voluntarily give the opposition something meaningful, or participate in the elections—which many in the opposition wanted to do, there was no way that there would be a free result,” he said, repeating the familiar US narrative about Venezuelan elections.

US must apply more pressure and resuscitate the Lima Group
Among the strategies that Bolton proposed to “demonstrate solid support from the United States” and prevent the extinction of the “interim term” of former deputy Juan Guaidó was the strengthening of the blockade and financial persecution of Venezuela.

“I think we can do more to enforce sanctions against the export of Venezuelan petroleum products,” Bolton said. “I believe that we can do more to control international financial transactions.” Bolton also said that it was necessary to restart a regional pressure mechanism such as the one used through the defunct Lima Group.

“I think we need to revive, if not the Lima group as such, we need some mechanism within the hemisphere,” Bolton said.

He stressed as “important” that, among the measures to be carried out to increasingly isolate Venezuela, would be “working more with Brazil and Colombia to seal the borders,” as well as “obtaining more details from the Venezuelan opposition” to “help” them.

Blinken in the lead
Bolton argued that, as part of the policy to coordinate and prevent the opposition from breaking up, the US Secretary of State, Antony Blinken, should be at the forefront of this process, downplaying the role played by Elliott Abrams, the so-called special envoy for Venezuela.