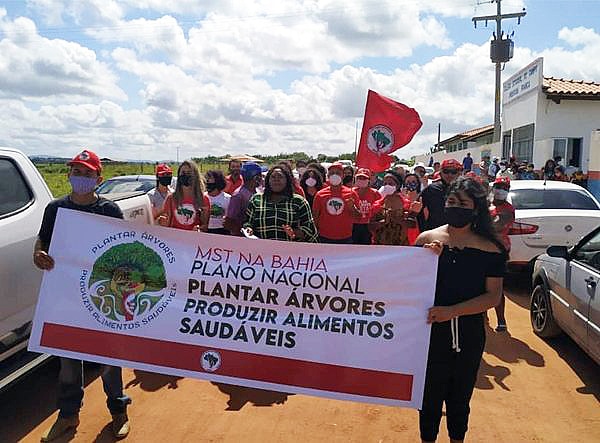 After Brazilian President Jair Bolsonaro posted a video on his social media networks accusing the Landless Workers’ Movement (MST) of violence against landowners in southern Bahia last Wednesday, April 14, the movement of landless farmers responded, “The Landless Workers’ Movement in the state of Bahia emphasizes that it has no involvement in the case and hopes that the investigations find those responsible.” In addition, they called on Bolsonaro to focus on the problems of the country in order to contain the rapid spread of the pandemic.

The official statement by the MST continued, “In this sense, we emphasize that the current government should worry about the rapid advance of the coronavirus pandemic, which has claimed the lives of 360,000 people here and has infected 14 million Brazilians, taking away their jobs and pushing thousands of families into poverty and bankruptcy, and closing hundreds of micro, small and medium businesses, instead of attacking the MST without evidence, during the week that the 25th anniversary of the Eldorado do Carajás Massacre is being commemorated.”

In the video released by Bolsonaro, a woman claims to have been assaulted by members of the MST in the Fábio Henrique camp, in the municipality of Prado, in southern Bahia.  It was in this city that in September 2020, the federal government sent the National Forces to accompany officials of the National Institute of Colonization and Agrarian Reform (INCRA) inside the movement’s areas.

Days later, the Federal Supreme Court (STF) of Brazil ordered the withdrawal of troops from the municipality, since there was no endorsement from the Bahia government for the operation.  The movement considered the sending of agents as political and a disproportionate measure taken by the government.

Lucinéia Durães of the MST leadership in Bahia, commented on the president’s accusation,  “We in Fábio Henrique camp repudiate the lies that Bolsonaro’s government has used to attack us.”  She also said that the government needs to address the poverty that is spreading throughout the country.