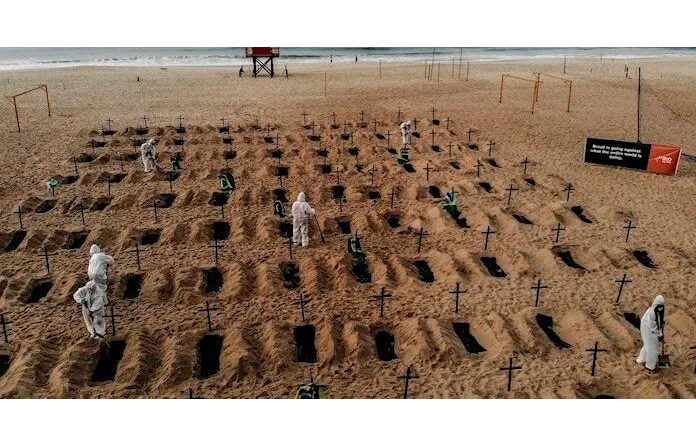 The sands of the iconic Copacabana beach in Rio de Janeiro woke this Thursday to a hundred mass graves that were opened to pay tribute to the almost 40,000 fatalities left by the coronavirus in Brazil, as well as to demand more effective measures to combat the pandemic.

In a protest organized by the Rio de Paz NGO, linked to the United Nations (UN), protesters also questioned the position of the government of Brazilian President Jair Bolsonaro, one of the most Covid-19 skeptical, amid the management of the pandemic, which has already left 39,680 dead and almost 780,000 infected in the country.

Nearly 40 volunteers have opened a hundred mass graves to symbolize deaths from Covid-19 and have called for more forceful measures to combat the advance of the disease in Brazil, the second country in the world with the most cases and which occupies third place in the number of deceased.

“Brazil is naked before the world. All their social injustices and misgovernment have emerged in these pandemic months,” said the president of Rio de Paz, Antonio Carlos Costa.

In the last week, the South American country, one of the epicenters of the coronavirus, has recorded three consecutive records of deaths and has been holding above 1,000 deaths per day.

If the rapid expansion of the pandemic continues, Brazil could surpass the United Kingdom in the number of deaths in the coming days, a “tragic and unacceptable statistic” that “demands urgent action by the federal government, according to Carlos Costa.

For him, “if Bolsonaro does not change course” in managing “that tragedy,” Brazil will become “the country with the highest number of deaths from Covid-19,” even surpassing the United States.

“There is no government that is handling this humanitarian crisis worse than ours,” he stressed.

The volunteers began the act in the early hours of this Thursday in front of the emblematic Copacabana Palace hotel, one of the most visited places by tourusts in the southern area of Rio de Janeiro.

In the graves, which refer to “cemeteries full of the entire country”, Brazilian flags and banners reading “Brazil, the country of graves” were hung.

Among other points, the protesters demand assistance for families in vulnerable situations during the coronavirus health and economic emergency, a health professional at the helm of the Ministry of Health, which is currently under the command of General Eduardo Pazuello, and the presentation of goals and effective proposals to combat the disease by the government.

Since the start of the pandemic, Bolsonaro has been criticized inside and outside Brazil for his management in the face of the greatest health emergency of the last century, which the far-right president insists on downplaying and has even described as “influenza” and “neurosis”.