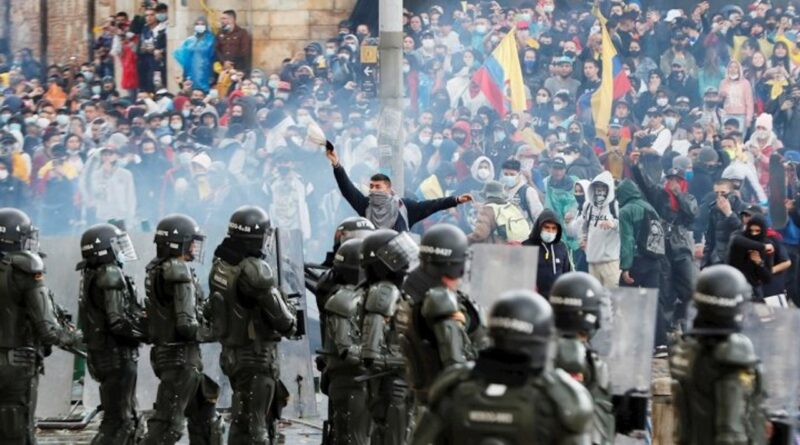 “They are killing us!” The cry comes from the people, millions who are rebelling against Uribismo, which is the cruelest form of neoliberalism in our America. The protest against the tax reform is entering its seventh day even though the government has said it is withdrawing it. Meanwhile it pushes further, the abuses being committed in its war against the people at the insistence of the oligarchy with the approval of the empire, which has turned Colombia into the second most unequal country in the region, where, in spite of the peace agreements, massacres and murders are daily bread.

The mobilization, called by the National Strike Committee (CNP) that began on April 28, continues. The body, which emerged with the outbreak of protests in September 2019, brings together all trade union centers along with peasant, indigenous and Afro-descendant organizations. Some pro-Uribe supporters and many people who voted for current president Iván Duque have also marched and followed the strike. They are aggrieved by this government and, often, disenchanted with former president Uribe, who, secretly, is the one who governs the country.

RELATED CONTENT: Leopoldo López Condemns Protests in Colombia from Luxury Condo in Madrid: Having Duque ‘is a Privilege’

Senator Gustavo Petro, former presidential candidate and leader of the Colombia Humana Party, has denounced President Duque for being a prisoner of Uribe, for having purged the army and the police of the commanders who were in favor of the peace accords and handing over the leadership of both forces to Uribe, and also the management of the economy. Minister of Finance, Alberto Carrasquilla, “who only obeyed Uribe and the bankers,” author of the tax “reform,” has resigned. Petro agrees with several researchers and analysts about what is behind the tax reform that they tried to impose with serious damage to important salaried and lower middle class sectors.

The tax measure sought to plug a huge gap in public finances due in part to huge transfers of money from the state budget to the banks’ coffers. “Carrasquilla made two serious economic policy mistakes,” says the senator: the first one, to approve the 2019 tax reform, where “taxes paid by oil companies, coal companies, banks and other large corporations were reduced by between 9 and 15 trillion pesos”. Second, already with Covid, it “over-indebted the State”, spending money from public debt “to maintain the profits of the owners of the banks”, which reached 14 trillion pesos last year “while the country went bankrupt and went hungry”.  In only two years of government, Carrasquilla “defunded the State,”Petro continues, and over-indebted it, making the situation unsustainable. Desperate, to remedy the fiscal deficit the Duque, Uribe and Carrasquilla gang resorted to the usual; to pass the bill along “to those who have the least.”

The “bill” implied raising VAT by 19 percent on most of the products of the basic basket: gas, telephone and electricity; an increase in gasoline; imposing severe cuts in social spending; freezing for five years the salaries of the public administration; granting extraordinary powers for six months to the president to sell, restructure or merge state entities and companies.  In other words, a major cut in the State apparatus.

In parallel to this, the Executive has presented in the chambers an initiative that deepens the privatization of the health sector and sources affirm that there are on the way initiatives for labor and salary reform –which, as is well known, threatens great attacks to the workers’ when applied by neoliberal governments.

This in a country where poverty by monetary income advanced in 2020 by 6.8 percent to 42.5, which means that 21.2 million people lack the means to satisfy their basic needs. Colombia rose from 4.6 million people in extreme poverty to 7.4 million. About 68% of the population have gone from eating three meals a day to only two and 10% of households can now put food on the table only once a day. Even within subjectivity as insensitive and distant from popular needs as the neoliberal one, it must be recognized that Duque, Uribe and those who designed this reform are possibly insurmountable.

Petro proposes to Duque to “free himself” from Uribe so that he may fulfill his last year of mandate and avoid a coup d’état to cancel the elections, which Uribismo would surely lose. He urges him to start a frank and sincere dialogue with the social movement and with the military and protesters to fraternize and avoid confrontations.

The government seems to be giving in after no less than 20 deaths, hundreds of wounded, 814 arbitrary detentions and 10 acts of sexual violence by the security forces. It has announced an agenda of meetings with institutions, including the CNP, which, it affirms, has accepted an initial meeting set for May 10. The real problem in all of this is that the oligarchy has never fulfilled its commitments.