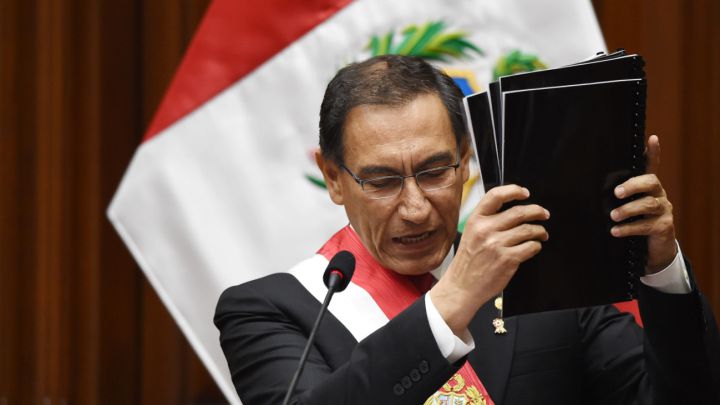 This Monday the Peruvian Congress approved the dismissal of the nation’s president, Martín Vizcarra, after a debate in the Legislative Assembly that lasted more than four hours. This request for dismissal was prompted in Congress by the “moral incapacity” of the Peruvian president. Likewise, the Prosecutor’s Office continues in the investigation against Vizcarra for an alleged case of corruption in the construction of a hospital when he was governor (2011-2014) for the Moquegua region.

Vizcarra will be replaced by the President of the Congress, Manuel Merino, who must take charge of the government until the completion of the current term, which ends on July 28, 2021. The dismissal occurs just five months before the next presidential elections.

The president’s detractors in parliament managed to get the necessary 87 votes, of the 130 possible, to advance with the dismissal. Thus, the final vote in Congress was 105 in favor of the interruption of his mandate, 19 who favored continuity, and 4 abstentions.

Merino will assume the presidency this Tuesday in a new virtual session of the full congress.

Defending
Earlier, Vizcarra went to the legislative headquarters to present his defense for the parliamentarians: “A vacancy would increase fears about the institutionality,” he said. It was the argument shared by the parliamentarians who opposed the dismissal, who insisted on safeguarding the country’s governance in the midst of the economic and health crisis.

For his part, Vizcarra had asked the Constitutional Court to rule on the interpretation of this appeal. And as for the accusation, he remarked: “There is no reliable evidence of any crime, and there will not be, because I have not collected any bribes.” Likewise, he affirmed that he will let the judicial investigations advance.

Corruption
The alleged crimes for which Vizcarra is accused are based on reports of him receiving $660,000 US in bribes from two companies investigated for corruption and links with the Brazilian multinational Odebrecht, which carried out irrigation works, and construction of a hospital, in the southern region he was governor of.

Last Sunday Peruvian media released content from the phone of the former Minister of Agriculture, José Hernández (2016-2018), who is close to the political circle of Vizcarra, in which alleged conversations about the concession and distribution of public works are revealed. However, judicial authorities are still investigating in order to clarify the facts.

The decision came after a previous vote, when Parliament had decided to advance the impeachment, with 60 votes in favor, 40 against and 18 abstentions. The process took place because Vizcarra was accused of having the “moral incapacity” to govern amid suspicions of having received bribes for the installation of the health center before becoming president.

Likewise, Vizcarra had requested to advance the date of the final vote to last Friday, arguing that the case generated “permanent anxiety.” However, the Board of Directors of Congress rejected the request and decided to hold the session on November 9.

The impeachment initiative was presented by legislator José Vega Antonio, secretary general of the  centrist Nationalist Union for Peru (UPP) party, who argued that “the people are tired of corrupt presidents” and called for the initiation of “a great crusade to combat corruption.”

First attempt
Thus, the Peruvian head of state could not defeat two dismissal attempts in less than two months. The previous one, initiated on September 18, was due to an alleged irregular hiring of singer Richard Cisneros by the Ministry of Culture.

At that time, the vacancy motion only reached 32 votes in favor and 78 against. Although it did not succeed, it significantly increased the political crisis in Peru, one of the countries most affected by the COVID-19 pandemic in the region.

Since the reform of the Constitution of Peru in 1993, a total of four requests for presidential vacancies have been activated. The first occurred in 2010 and resulted in the dismissal of Alberto Fujimori, who days before had resigned his post from Japan. Two others occurred between December 2017 and March 2018, when Vizcarra’s predecessor, Pedro Pablo Kuczynski, resigned to avoid being fired on the second attempt.

Answer from Vizcarra
Facing the decision by congress, Martín Vizcarra announced this Monday that he would not take “any legal action.”

“Today I am leaving the government palace. Today I am going home despite the fact that there are innumerable recommendations for us to initiate legal actions to prevent this decision,” said the president.

On the other hand, Vizcarra added that during his tenure he faced “successive crises,” in which he always respected “legality” and worked with the “Constitution in hand.” In addition, he assured that he doesn’t agree with the decision of the legislators, and will leave the palace “with his head held high.”