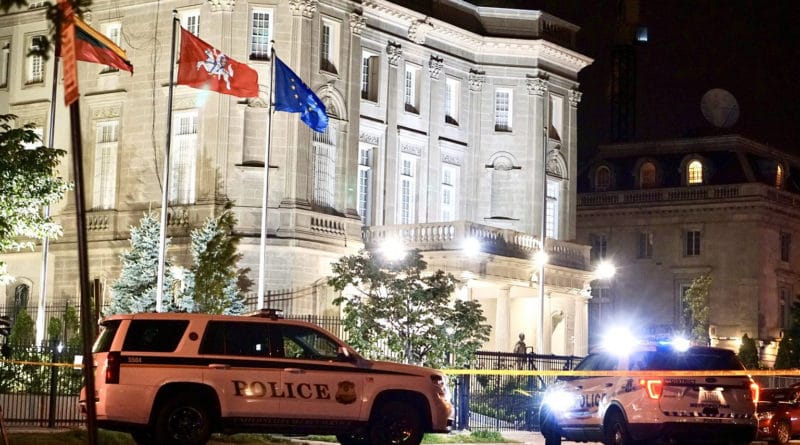 In the early hours of this Thursday, April 30, an unknown individual shot with a high power firearm at the building of the Cuban Embassy in the United States, the Cuban Foreign Ministry reported in a press release on its website. There was no injury to the mission’s personnel, who are safe and protected, but there was material damage to the building resulting from the impact of the shoots, he specified.

The individual, whose identity has not been disclosed to the Cuban government, was detained by local authorities at the scene and is in custody.

The Cuban diplomatic mission, located in the city of Washington DC, has a protection and security system to face any threat against its personnel and facilities.

The Cuban government awaits the corresponding investigation by the US authorities on the identity and motivations of the author of this aggression, as well as on the circumstances surrounding the incident. The State Department is aware of what happened.

RELATED CONTENT: Cuba Nominated for Nobel Peace Prize for its Fight Against Covid-19

It is an obligation of the States to adopt all the appropriate measures to protect the premises of an accredited diplomatic mission in their country against any intrusion or damage and to avoid that the tranquility of the mission is disturbed or its dignity is violated, the Foreign Ministry said.

Cuban Foreign Minister: “It is the obligation of the States to protect the diplomats accredited therein.”

Cuban Foreign Minister Bruno Rodríguez Parrilla repudiated the assault on the Cuban embassy in the United States. On his Twitter account, the Foreign Minister posted that it is the obligation of the hosting state to protect the diplomats accredited to it and its facilities.

For his part, the Venezuelan Foreign Minister, Jorge Arreaza, also issued a forceful rejection of the armed attack. “We repudiate the armed aggression against the Cuban Embassy in the United States and call for full compliance with the Vienna Convention. The constant attacks by the Trump government can cultivate dangerous expressions of hatred in the population. The US must protect diplomatic headquarters,” said Arreaza on his Twitter account.

Details of the incident, according to the local press

“The shooting erupted around 2:10 am outside the embassy, on 16th Street NW near Fuller Street NW, before police in the area arrived at the scene and within minutes arrested the suspect, who the authorities refused to identify,” says The Washington Post.

In photos, impacts of the shooting in the embassy building

Cube eager to cooperate in the investigation of this terrorist incident

At the end of the day, Cuban chancellor Bruno Rodriguez gave new statements on this terrorist incident, according to Telesur. The top diplomat expressed Cuba’s willingness to help in the investigation and urged the US Department of State to adopt the necessary measures to fulfill its legal responsibilities as a hosting state according to the Vienna Convention.

#Cuba's Foreign Minister expressed the will of his Government to assist in the investigation of the attack against the diplomatic headquarters of the Caribbean island in Washington. https://t.co/y2fSTCR5YH

Featured image: Agents found the suspect with an assault rifle and detained him without incident. Photo: Agencies