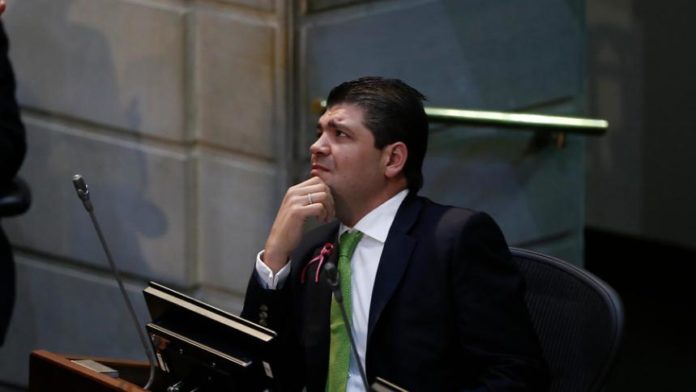 In a statement released on social media networks on Wednesday, October 20, the president of the Colombian Senate, Juan Diego Gómez, appeared to have backed down regarding the proposal to advance in the reestablishment of relations with the Bolivarian Republic of Venezuela, which he submitted in writing to the National Assembly.

With this position, the senator has taken back his words, when there was already confirmation of the committee for this purpose. The reciprocal measure was received by the Venezuelan National Assembly, and the respective legislative body of the Assembly was created.

However, Gómez asserted that it is the exclusive responsibility of the Colombian president to decide how to handle international and diplomatic relations, through the Foreign Affairs Ministry. He stated, “Proposition 34 approved yesterday in the plenary session of the Senate in no way replaces the constitutional powers headed by President Iván Duque, who has been categorical in stating that the Colombian State does not recognize President Nicolás Maduro.”

RELATED CONTENT: Venezuela Objects to US Secretary of State’s Visit to Colombia

The U-turn by the president of the Senate of Colombia comes after Iván Duque reiterated his accusations against the administration of President Nicolás Maduro of being a “dictatorship.” At the same time, Duque asserted that he has no intention of recognizing Maduro’s legitimacy while he remains president of Colombia.

Common interests
For its part, the Venezuelan National Assembly had moved forward in response to the proposal of Colombian Senator Juan Diego Gómez, and appointed the commission that will be in charge of coordinating with its Colombian counterparts, according to the Senate proposal.

The mixed parliamentary delegation is to be headed by Deputy Timoteo Zambrano as president and Julio Zerpa as vice president. Didalco Bolívar, Carlos Mogollón, Emma Díaz, Grecia Colmenares, and Jesús Suárez will also be part of the commission.

With all this, the decision announced by the President of the National Assembly, Jorge Rodríguez Gómez, is fulfilled. Rodríguez stressed the day before that the Venezuelan government is ready “to establish any type of coordination necessary for the purposes of complying with the three elements contained in Colombia’s proposition number 34 of 2021.″