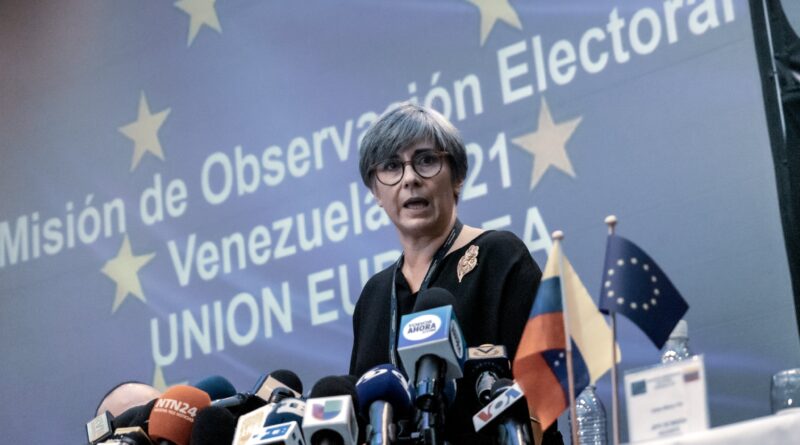 After recognizing the balance of Venezuela’s National Electoral Council (CNE), the head of the European Union’s Electoral Observation Mission, Isabel Santos, earlier today presented the preliminary report of its work in Venezuela.

The EU’s Electoral Observation Mission (EOM), which participated as an observer in last Sunday’s elections on the invitation of Venezuela’s government, will deliver its final report between January and February of next year, according to Santos.

“This is a preliminary report to comment on the observations to date,” Santos said at a press conference. “There are still critical stages… I will return to Venezuela at the end of January, the beginning of February, to present the full report.”

The report, written in a typical European supremacist tone, mentioned alleged flaws in the process, and was plagued with familiar US and European talking points attempting to smear Venezuela and its political system. While the preliminary report fails to provide a clear picture of the overall process, it does at one point stress that the observers evaluated the electoral process as “good or very good.”

Santos emphasized that the five CNE rectors achieved improvements in technical components of the elections through internal dialogue. In addition, she added that the three rectors considered close to the government had control of the executive bodies of the CNE, while the other two rectors did not hide their dissenting opinions from public opinion on issues on which consensus could not be reached. She failed to mention, however, that the most important decisions of the electoral authority were taken by consensus among the five rectors.

On the other hand, Santos saluted the CNE for its professionalism and the spirit of cooperation with which it always responded to the requests of the EOM. She also expressed her appreciation to all European observers, as well as to the Venezuelan staff who worked on the process, both in the long and short term.

She also said that the EOM and all the members of the organization adhered to the Code of Conduct, respecting the sovereignty of the Bolivarian Republic of Venezuela.

“All of our observers have adhered to the Code of Conduct,” Santos said. “This means that they have committed themselves at all times to respect the sovereignty of the country, its laws, maintain strict political impartiality and not interfere in internal affairs.”

In this regard, she specified that she will “fight” so that the preliminary text presented this Tuesday is not used by partisan interests.

“The preliminary report that we present today cannot be the object of political opportunism,” Santos said. “It is a technical approach, to an electoral context and an electoral moment lived, and a useful tool to improve electoral processes.”

“We will fight, personally, I will fight any… attempt to interpret this declaration in favor of partisan interests,” Santos added.

Among the advances, the head of the EU Mission highlighted the balance and professionalism on the part of the National Electoral Council.

“The current administration of the National Electoral Council has been the most balanced that Venezuela has had in 20 years, which is key to rebuilding trust in political life,” Santos said. “The five rectors achieved improvements in the technical components of the elections, through internal dialogue.”

On the other hand, Santos described the visit of the EU Observation Mission to Venezuela as “historic,” after 15 years of deciding not to participate as observers in Venezuela’s elections.

In this sense, she pointed out that 136 observers were deployed for election day, from 22 EU member states, throughout all the states of Venezuela plus the Capital District, visiting more than 600 voting centers.

However, she considered that the “CNE needs to be strengthened in its sanctioning powers,” because—according to the EOM—the electoral campaign “was marked by the extended use of state resources,” as well as “check points, known as red dots (Puntos Rojos) in different states,” despite the explicit prohibition by the electoral body.

Trust in electronic voting
For his part, Jordi Cañas, head of a delegation from the European Parliament, highlighted the trust generated by the electronic voting system on this election day, which passed through more than 18 audits to guarantee the secrecy and accuracy of the vote.

“I would like to highlight the correct functioning of electronic voting as a positive aspect,” Cañas said. He went on to commend the “respect for our observation mission by the CNE, with the proper functioning of the electoral process.”

He also pointed out that the opposition’s decision to participate in these elections led to an EOM being sent to the country, despite the fact that the invitation was made by the CNE.

“We have been able to verify progress in the Venezuelan electoral process, progress as a result of political dialogue,” Cañas said. “The first is the majority decision of the opposition to participate, after years of not participating in electoral contests—a participation that was decisive for the European Parliament to come. Without the participation of the opposition in these elections, there would have been neither an Observation Mission nor a delegation from the European Parliament.”

He also highlighted the participation of women in political life. However, he considered progress in electoral matters to be slow in the country.

“These elections can be a first step, which can only advance in the political dialogue between Venezuelans, which we are willing to take,” Cañas said.