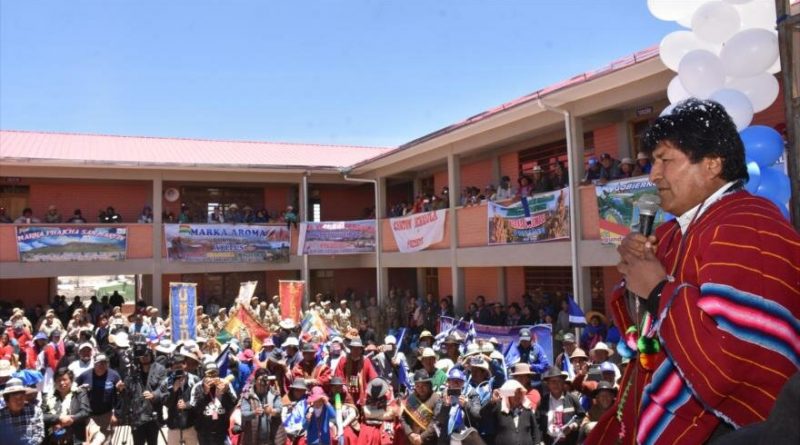 The Bolivian president addressed the violent actions of the opposition in his country that refuses to recognize the results of the elections held on October 20.

The president of Bolivia, Evo Morales, asked the opposition of his country to lift the stoppages and blockades until the results of the electoral audit that began this Thursday with the accompaniment of the Organization of American States (OAS) and delegations from Mexico, Paraguay and Spain, are known.

In a press conference, Morales said that, in the face of allegations of fraud on the right, he has been summoned to verify the results of the elections held on October 20. “We have nothing to hide,” he said.

The Bolivian president criticized the right-wing leaders who do not present evidence of the alleged fraud and do not believe in the audit that is carried out.

“Do not instigate hatred and racism,” Morales said, in relation to the violent acts executed by the right that already include two fatalities.

Earlier, Morales questioned the opposition in his country that, given its inability to win elections, undermines national stability, especially against the economy.

The indigenous president referred to the violent and destabilizing actions of the right from El Alto, where he participated in the delivery of the Franz Tamayo Educational Unit.

He denounced some sectors of that nation for trying to prevent the nation from moving forward, however, he said, his government has a “good economic plan.”

“Bolivia has been shown to have a great future,” added the president who has led the South American nation to maintain an average economic growth of four percent and is examplary in the redistribution of wealth.

In addition, Morales referred to the coup attempts of states that run opposition sectors and said they have failed thanks to the unity of the Bolivian people.

This Thursday, social organizations remain mobilized in defense of the votes that gave Morales re-election with 47 percent of popular support.

Meanwhile, right-wing leaders, including losing presidential candidate Carlos Mesa, reject the electoral audit that begins Thursday with the participation of the OAS and representatives of the governments of Mexico, Paraguay and Spain.