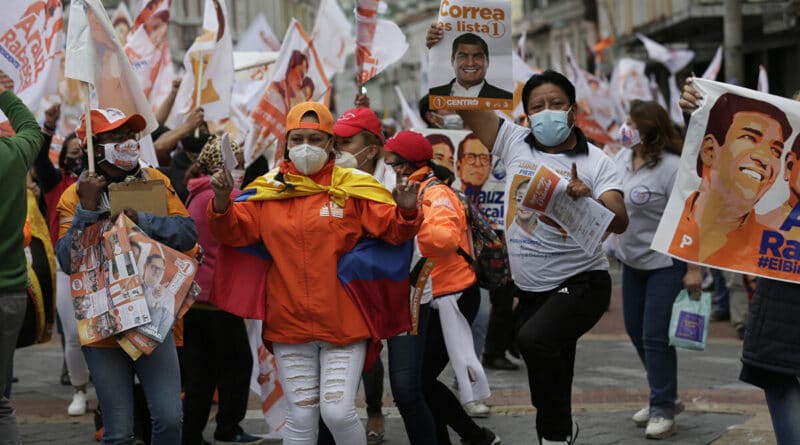 Less than a week before the presidential elections in Ecuador there are still threats regarding Andrés Arauz’s candidacy and the electoral process itself. It is a contest which has been plagued by numerous obstacles within a framework of political persecution [lawfare] that has been systematic during the Lenín Moreno government.

Ecuador is on the verge of a decisive presidential and legislative election. On Sunday, February 7, 16 candidates will face each other, three of whom have a more likely chance of winning, according to most polls: Andrés Arauz, Guillermo Lasso, Yaku Pérez, in that order, with a difference of about ten points between the first and second in popular preferences.

Arauz is presented by the UNES coalition, which represents the citizen’s revolution, the movement led by former president Rafael Correa. Lasso, “is the banker’s candidate,” as Irene León, an Ecuadorian sociologist, defines him, and represents his CREO party in alliance with the Social Christian party. Pérez is a candidate of the Pachakutik movement, which “has experienced many internal difficulties in the race, and is far behind the other two.” 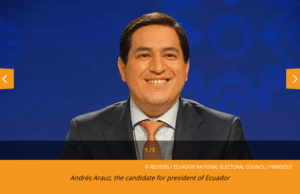 To win in the first round it is necessary to obtain more than 40 percent of the vote, with 10 points of difference over the second candidate. Otherwise, the first two candidates would meet in a runoff. It is thought that Arauz, who in a majority of surveys is close to 40%, could achieve the feat. That is what people are talking about in Ecuador, and expectations are high and threats are being unleashed in response to that possibility.

The threats are not new: since the beginning of the campaign there have been obstacles, irregularities, illegalities. “The possibility of registering the candidacies of progressivism has been difficult, complex,” explains Irene León. “We are talking about a country in which political movements and candidacies have not only been censored, as happened to Rafael Correa, but now it is forbidden to name Correa himself in the campaign.”

Thus, less than a week before the contest, “there are still objections from political actors interested in Arauz’s candidacy being denied.” To understand this situation, it is necessary to analyze what has happened in the last four years, that is, under the presidency of Lenín Moreno.

Destroying the Citizen Revolution and lawfare
“The core of what is happening in Ecuador today is part of a cycle intended to destroy progressive proposals—the Correa governments between 2007 and 2017—and an intensive return to neoliberalism,” León analyzes from Quito. 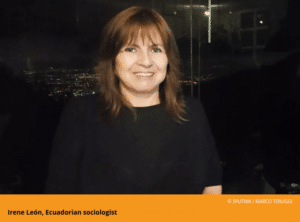 That process “was accompanied by the de-institutionalization of the country. We found ourselves with a very important, solid Constitution, but one that is no longer respected by the powers that be. It is an institutional framework of five levels that functions according to the taste of the elites, and involves a dismantling of the public sector and the privatization of everything associated to the economic support of a different project.”

The destruction has taken place simultaneously with “an intensive judicialization of politics” [also know as lawfare]. During the Moreno years (he began his presidency in 2017), “the assembly of an apparatus of persecution, judicialization and sanctions on different political initiatives and leaders was activated, mainly aimed at progressivism and the left.”

In this way, in addition to Correa, leaders such as Paola Pabón, Virgilio Hernández, and Jorge Glas, who had been vice president, have been in prison since 2017. “In the discourse coming from the elites and the right, in fact, several speak of eliminating correísmo from the scene altogether,” explains León.

Managing to get Andrés Arauz’s candidacy registered was particularly difficult, as was Carlos Rabascall for the vice presidency. Once the registration was completed, the threat changed: “There has been a jump from trying to prevent these candidates from participating, to trying to prevent the elections from taking place, and this idea of eliminating or postponing the elections is supported by a number of different actors.”

León points out, for example, that in recent days a concierge from the National Electoral Council (CNE) has proposed taking away Arauz’s political rights and eliminating the Arauz-Rabascall duo. “The CNE has great difficulty in showing transparency in its actions, in fact, this CNE has political actors on the right who respond to the interests of other candidates and who are acting and playing hard so that, if their candidates do not win, there will be no elections.”

Washington
Lenín Moreno went to Washington in the last week of January.

There he met with key political and economic representatives:

• Juan González, the director for the Western Hemisphere of the National Security Council
• Kristalina Georgieva, Director of the International Monetary Fund
• Luis Almagro, Secretary General of the Organization of American States (OAS), infamous for his role during the coup in Bolivia in 2019

“Here in the country there were many questions about what this man is doing in the last days of his mandate, by meeting with these representatives,” says León. Throughout his term in office, Moreno has had “an alignment with the hemispheric project of the United States,” something that could be seen, for example, in his active policy of dismantling the Union of South American Nations (UNASUR).

“This is significant for these elections, because at this time, regardless of the weight that Ecuador may have on the international stage, that alignment they have achieved with various countries is important for the US project.”

The importance of this alignment seems unlikely to change with the new US government under Joe Biden: “The US has a long-range international policy, a strategic state proposal, so these lines move very little from one government to another… what they change are the modalities of execution of that strategic project,” stressed the Ecuadorian sociologist.

Together with other governments in the region, Correa’s mandates posed “one of the greatest historical challenges that have been placed in front of the United States.” This was done by advancing “a project of regional sovereignty, of Latin American integration,” by means of using UNASUR as a key tool, for example.

“Without a doubt, the proposal from candidate Arauz is to return to a sovereign Latin American integration, which articulates the countries around a common vision for this project that can be synthesized as a project of a Patria Grande. This allows a common horizon for our countries, independently of the political differences that may manifest themselves, a common project of medium and long-term sustainability,” highlighted León.

Continental dispute
The election in Ecuador takes place at a time of continental disputes where, in recent years, there has been a recovery of forces from progressive sectors, from the left, expressed both in popular uprisings, such as in Chile and Ecuador in October 2019, and in presidential elections in Mexico in 2018 with the victory of Andrés Manuel López Obrador, in Argentina in 2019 with Alberto Fernández, or in Bolivia in 2020 with Luis Arce.

A victory for Arauz in Ecuador would be another step in that recovery and, above all, greater strength to advance in the reconstruction of regional integration instruments, such as UNASUR and the Community of Latin American and Caribbean States (CELAC).

Therefore, the February 7 election has a strong Latin American imprint, something that was expressed, for example, in two false news broadcasts by two large-scale media a few days before the elections. The Argentinian newspaper Clarín stated that Arauz was offering $250 to voters before the elections, and Colombia’s Semana Magazine wrote that Arauz had received money from the National Liberation Army (ELN).

“We are not talking about the media here, but about corporations. They act more and more openly and in a coordinated way in the electoral decisions that are made in various countries. That is, they seek to put their own managers at the top of the power base, and not politicians that attempt to act autonomously,” says León.

The role of these international media corporations is part of the adversity scenario that Arauz’s candidacy has faced since zero hour. “We are talking about an electoral campaign in which the candidate does not have equal access or does not have any access to the media. And has international media against it, nor has it had the campaign funds that have been delivered to the majority of political forces.”