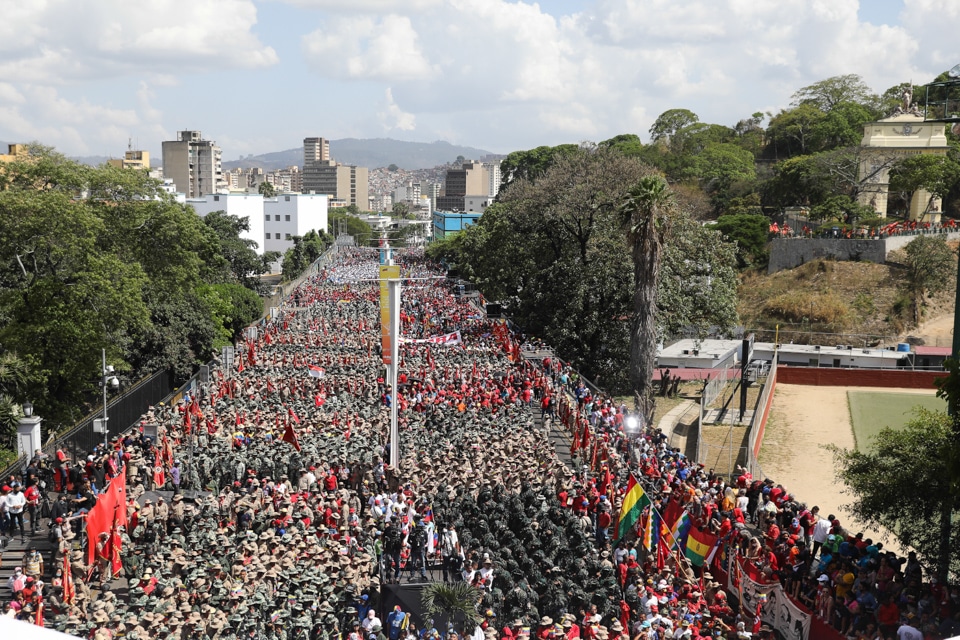 Ave. Sucre full of people during the march to celebrate the 20th anniversary of the Coup against Hugo Chavez in April 2002. Photo: PSUV.

The President of Venezuela, Nicolás Maduro, recalled this Wednesday that 20 years ago, on April 13, 2002, the Venezuelan people defeated an imperialist coup and restored Hugo Chávez to the presidency.

During his address of the Great Civic-Military March organized to celebrate the historic milestone, Maduro said that “20 years ago the people defeated the coup of imperialism” and international right wing forces.

The head of state received the Great Civic-Military Popular March for the Day of the Rescue of National Dignity and the 13th Anniversary of the Bolivarian Militia in downtown Caracas.

“Imperialism believed that the Venezuelan people were going to watch the events from afar, and what they did was a historical lesson in defense of La Patria (the Homeland),” President Maduro said.

“On April 13, it was the united Patria that rescued Chavez in that people’s revolution,” he added.

President Maduro said that “the April revolution united all the forces that had been demonstrating for decades,” while asserting that “there is no defeated or vanquished people because the people continue the struggle.”

He thanked representatives from 53 friendly nations for their participation in the events organized on April 13 to commemorate the historic event.

The march towards the República Bridge, located in the vicinity of Miraflores Palace, the seat of the presidency, started at noon from Plaza San Martín and Plaza Morelos.

On April 13, 2002, a historic event occurred, when the Venezuelan people refused to allow their democracy and sovereignty to be taken away, leading to the rescue of President Hugo Chávez Frías, who returned to his post less than 48 hours after a right wing-coup d’état took him briefly out of power.

Militia reboot
President Maduro said that the Venezuelan government is moving towards a greater fusion between the people and the Bolivarian National Armed Force (FANB).

The president announced the revival of the Bolivarian National Militia, which to date has 4.5 million men and women within its ranks.

Diosdado Cabello
Vice president of the United Socialist Party of Venezuela (PSUV), Diosdado Cabello, said that the Venezuelan people are still fighting against the attacks of imperialism. He also pointed out that Venezuelans “accompany President Nicolás Maduro in each of the battles” in defense of the homeland.

“20 years later we can say that it was worth it on April 11, 12, and 13,” when the people took to the streets to restore democracy and facilitate the return of Commander Hugo Chávez to Miraflores Palace, after the coup organized by right-wing actors allied with foreign powers, particularly the United States.

“From that loyalty, that year … an impressive figure was born, because of its strength, which is the civic-military union,” said Cabello, referring to the strengthening bonds between the organized people of Venezuela and the military force, that a few years later permitted the creation of the Venezuelan Militia, currently one of the four components of the Venezuelan Bolivarian Armed Force (FANB).

Featured image: Sucre Avenue full of people during the march to celebrate the 20th anniversary of the restoration of President Hugo Chávez in April 2002, following the short-lived imperialist coup. Photo: PSUV.