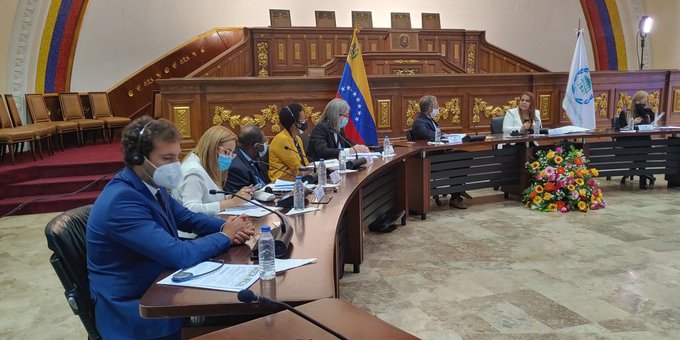 The international delegation will be in the country until August 27 and will meet with various Venezuelan authorities.

A delegation of the Inter-Parliamentary Union (IPU) arrived in Venezuela this Monday, August 23, and held a meeting with deputies of the National Assembly (AN), led by its First Vice President Iris Varela, who emphasized the AN’s willingness to achieve a “fruitful exchange” during the visit.

“We want you to know that our country has a very welcoming attitude towards solving all the problems that affect our people as a result of the national dialogue, these problems that have been generated as a result of much thoughtlessness unleashed along the way,” said the first vice president.

Varela also commented on several unfounded and reckless complaints, a product of the political uproar, that are being allayed by the national dialogue.

“We were able to appoint a new Electoral Power, which was based on consensus, and in which individuals now participate who are recognized members of the political opposition to the national government,” she said.

For his part, the President of IPU, Duarte Pacheco, declared that his organization’s function is to support dialogues between countries, or between various organizations within the national boundaries.

“We have wanted to come to Venezuela and organize this mission,” he said. “The best way to contribute is to get to know the reality. Through the actual state of affairs, we can see with our own eyes, and not through the narrative of one party or another.”

In addition, he commented that IPU plans to prepare a report on its visit for the executive committee, and noted the significance of this visit for important aspects of the human right of parliamentarians, and for the representation of Venezuela in the organization.

RELATED CONTENT: Elliott Abrams: If Opposition Decides to Reform or Eliminate ‘Interim Government,’ We Must Support It

Pacheco indicated that the delegation hopes to discuss the accusations they have received, and to receive the opinion of the country’s authorities in this regard.

Hours before, the president of the Parliament, deputy Jorge Rodríguez, commented on the visit of the delegation and its presence in the country until August 27, as it meets with representatives of the public offices and opposition leaders.

This visit follows an invitation issued by Rodríguez last April, when he was at the IPU headquarters in the Swiss city of Geneva, in which he urged a delegation to come to the country to experience the real state of affairs in Venezuela.

The IPU is an international organization of national parliaments that seeks to promote cooperation, accountability, and democratic governance among its 179 national member parliaments and 13 regional bodies.