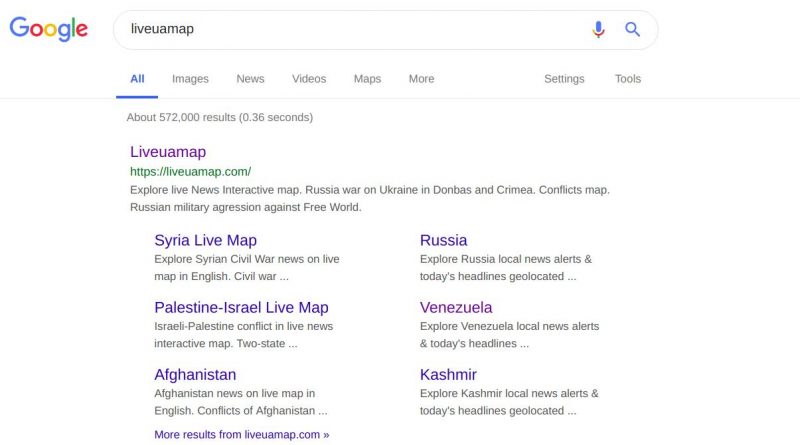 Editorial Note: We have edited this piece omitting a reference to the Essequibo Territory and the territorial dispute Venezuela has with Guyana as a result of the British ilegal occupation in the XIX century. The omitted paragraph seems to not know that outside Venezuela all maps (even google maps that feed liveuamap) attach that territory to Guyana. We are not taking a position on that issue and we -as Venezuelans- defend the legitimate Venezuelan territorial claim.

As part of the campaign that seeks to justify a military intervention against Venezuela, the government of the United States has deployed a strategy aimed at promoting the image of the existence of a war in the country, for which it has used the media as its main weapon, one dominated by the great capitals of Europe and the United States .

The terms “conflict”, “crisis”, “shock”, “combat”, to refer to the situation in Venezuela , as well as “coalition” and “sides” to describe those who fix an attack position or defense of Venezuelan institutions, are used on a recurrent basis by these means in order to position in  world public opinion the idea of a need for the implementation of a decisive action that “returns” peace.

As new evidence of this strategy, there is the inclusion of Venezuela in liveuamap.com; a web and platform App , dedicated to provide “informative” coverage through the “geomap” system to countries where “war conflicts” develop, such as Syria, Ukraine and the Kashmir region .

Hand in hand with the USA

Born during the so-called Ukrainian Color Revolution, which was promoted by the United States, this digital platform is qualified as “a site that covers” conflicts, human rights issues, protests, terrorism and weapons deployment”, being a detail that reveals its nexus with imperialism, its fiscal address, which is located in Virginia, near the District of Columbia where the city of Washington is located, capital and seat of the entire governmental structure of US imperialism.

With the use of “feeders” this page identifies and delimits in a striking way the military installations of the components of the Bolivarian National Armed Force (Fanb) throughout the Venezuelan territory.

In addition, through the use of technology, it locates information that conforms with the strategy of evidencing chaos in the country and shows it by using icons that range from an alarming rifle to signal a protest where there is a presence of the anti-riot unit of the Guard Bolivarian National (GNB) to which they qualify as “confrontation”, until news about the explosion of an oil pipeline, which they located in Venezuela, although it happened in Colombian territory, evidencing that they do not rule out the inclusion of fake news.

The incursion into the scene of this new platform adds to the technological tools that Trump’s administration has launched, through fake news, the creation of matrices and the magnification of activities from the Venezuelan anti-chavismo, to create the image of a weakened government that subjects the majority of the population through the use of force, all this to create in public opinion the need for military action to overthrow the Bolivarian Revolution.

OT has also researched this issue and found that its founders are two Ukrainians named Aleksandr Bilchenko (@Billchenko)  and Rodion Rozhkovsky (https://www.linkedin.com/in/rozhkovsky/) who precisely developed the tool during the 2014 color revolution uprising that afflicted the eastern European country and put in power the neo-fascist pro-US Petro Poroshenko’s government.

Looking at Bilchenko’s profile you intermediately notice how pro-US and anti-Russia the character is.