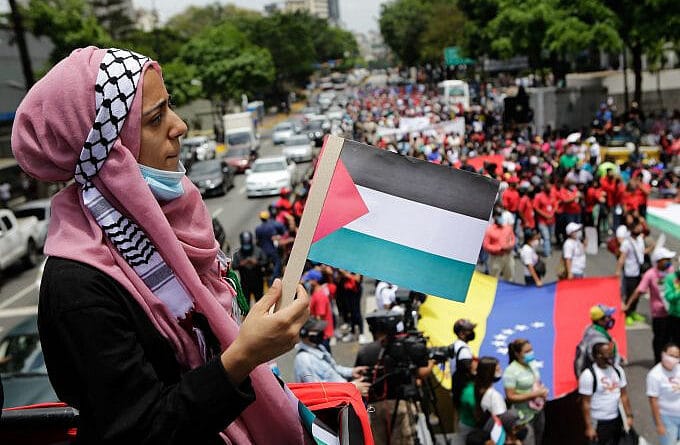 Hundreds of Venezuelans mobilized in Caracas this Tuesday, May 25, in a show of solidarity with the Palestinian people and denouncing the 11 days of criminal aggression and bombardment of Gaza by Israel. The march started from Plaza El Indio in Chacao, east of Caracas, and ended at the headquarters of the United Nations (UN), in Torre Parque el Ávila.

The United Socialist Party of Venezuela (PSUV) delivered to the UN a statement in support of Palestine, stating that both ”the Bolivarian Republic of Venezuela and the PSUV express their strong rejection and condemnation against the acts of extermination carried out by military troops of Israel, executed by the government of Israel, since May 10, through hundreds of indiscriminate bombings against the Palestinian people in the Gaza Strip. These acts of aggression caused the death of 277 Palestinians, including 70 children and 40 women, and left 8,500 wounded and immeasurable damage to Palestinian infrastructure.”

RELATED CONTENT: The Past is the Present in Palestine

The statement also condemned the ”criminal policy of Zionism, based on an ideology of racial segregation, extermination, colonization, house demolition and the expulsion of all Palestinian citizens from their territories, since the year 1948 with the aim to annex all land belonging to Palestinians, which constitutes a clear violation of international law, as well as all UN resolutions and mandates on Palestine.”

The statement also decried that this Zionist act of war, causing death and forced displacement of Palestinian families, was carried out during the holy month of Ramadan that is dedicated to peace. The statement denounced these aggressive actions against civilians as war crimes and crimes against humanity. ”We condemn these policies that are aimed at the military conquest of the entire Palestinian territory,” added the statement.

”The United Socialist Party of Venezuela reaffirms the historical position of Venezuela in support of the Palestinian cause, based on the defense of the sovereignty, independence and self-determination of its people,” the statement declared.

”We have walked these streets to say that Venezuela is not indifferent, that indifference is complicity,” said Asia Villegas, deputy to the National Assembly for PSUV, who participated in the march.