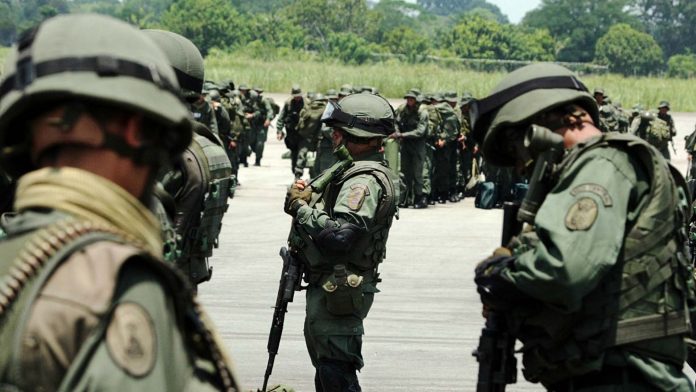 On Sunday, March 28, the President of Venezuela, Nicolás Maduro, alerted the Bolivarian National Armed Forces about the attempts of the Colombian government to propitiate an escalation of the unconventional war against Venezuela, based on the violent acts of last week in Apure state.

“Beware of falling to provocations,” said Maduro, while speaking to the Strategic Operational Commander Remigio Ceballos, who offered a summary of the actions taken by Venezuelan authorities on the Colombian-Venezuelan border, where paramilitary groups have created camps as bases of operations to commit crimes in Venezuelan territory.

Maduro not only expressed all his support for Venezuelan military deployments in the framework of the Hugo Chávez Bolivarian Shield drills, which dismantled clandestine tracks used to traffic drugs processed in Colombia, but also alerted that violent acts like those in Apure state could be used to instigate a military response from Venezuela.

“Let us deploy everything we have,” opined the Venezuelan head of state. “In Colombia they must be already preparing for a revenge, because they want to escalate the tensions to a military conflict… they want an attack with a forceful response to create a direct confrontation between Colombia and Venezuela,” the president lashed out.

“All my support for the Bolivarian Shield drills along the border; we are ready for this battle,” said the president during a TV broadcast for the weekly Covid-19 brief. “The Colombian government, as always, has abandoned its border,” he added.

Features image: The Venezuelan Army is prepared to repeal and neutralize attacks by Colombian paramilitary and army. File photo.