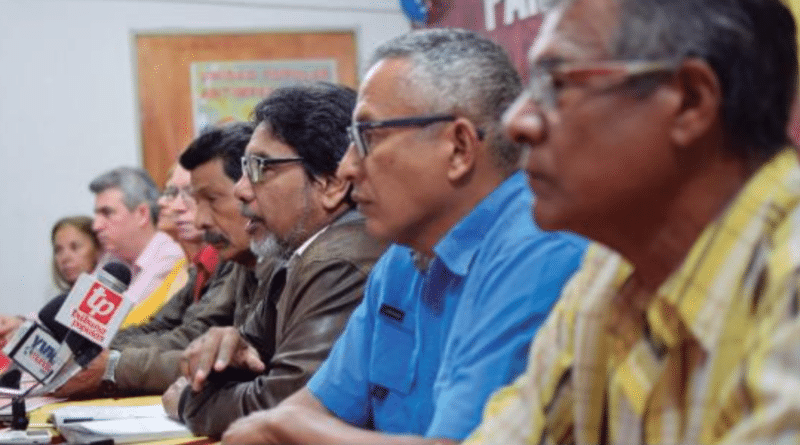 Caracas, Tribuna Popular.- “The effects of the Covid-19 pandemic have revived the old debate on the nature of the capitalist state as printed in a statement issued on June 29 by the Political Bureau (BP) of the Central Committee of the Venezuelan Communist Party (PCV).

In the opinion of that leading body of the Venezuelan communists, the general collapse of the health and social security systems in the face of the global epidemic “has revived the historical discussion between the apologists of the neoliberal State, on the one hand, and the defenders of the State interventionist and benefactor, on the other.”

In Latin America and the Caribbean in particular, adds the statement, “liberal anti-popular policies deepened in the framework of the pandemic by the so-called neoliberal governments, have not only provoked the reaction of the popular and labor movement, but have also contributed to the regrouping of the forces that identify with the so-called “Latin American progressivism” who raise the flags of the intervening State.

The Political Bureau of the PCV pointed out that, in our country, this debate goes beyond the pandemic and its effects, due to the deep crisis of Venezuelan dependent and rentier capitalism, and is expressed as a confrontation between those who identify the action of the State in the economy as the main cause of the crisis and those who, “under the ideological clothing of Bolivarian socialism of the 21st century,” defend the concept of the welfare state.

CAPITALISM WITH DIFFERENT FACES
After its introductory reflections, the declaration affirms that in reality “neither is neoliberalism the absence of state intervention in the economy, nor is the welfare state intended to protect the universal rights of the population.” Both, the BP continues, “are concrete political forms through which the different phases of the process of capital accumulation at a national level materialize.”

So, according to the analysis of the Red Rooster party (PCV), the essence of both models is the same, and, regardless of their forms, neither aim to satisfy human needs: “on the contrary, their primary objective is to produce more capital than they put into operation through the appropriation of surplus value stolen from the workers.” In other words, in essence, both serve the same objectives of exploitation of the labor force for the benefit of capital interests through different procedures.

The BP recalls that, in the imperialist phase of the capitalist mode of production, the process of capital accumulation is global in its content and national in its form, and that this determines that capital exists fragmented into national portions where accumulation takes place according to the particular conditions that are presented in each country. Consequently, the capitalist state “emerges as the political representative of each one of these national fragments of capital, and therefore is the guarantor of its accumulation process in each national sphere according to the specific characteristics that govern it.”

THE VENEZUELAN CASE
In our country, and to some extent also in other Latin American countries, continues the statement by the PCV leadership, the process of capital accumulation is governed by land rent. The Venezuelan economy, in particular, has had as its axis the production and sale of crude oil. The source of national income has not been the exploitation of oil workers, “but the industrialized countries that buy our oil at commercial prices higher than the Venezuelan price of production.”

The BP later stresses that “the magnitude of the oil income and its fluctuation, when determining the base of the scale of capital accumulation in Venezuela, also determines the type of state and the policies that capital demands.” Thus, the growth of income in times of oil boom translates into a greater participation of the State in economic life. On the contrary, the decrease in income when the oil markets collapse determines a restriction on the accumulation of national capital, which in turn leads to the establishment of liberal state policies in accordance with the needs of capital.

The essential unity between the neoliberal model and the benefactor model is evident, in the opinion of the communist leadership, in the behavior of the Bolivarian government, which, for 20 years, has fulfilled this double role in accordance with the flows of oil income: “In the phase of high oil income, the expansionary economic policy was oriented towards nationalizations, the growth of productive activity supported by income, high labor income and high social investment. While in the phase of declining income, it has been characterized by the implementation of liberal policies such as sustained and abrupt reduction of wages, decrease in social spending, disinvestment and collapse of public services, privatizations and dollarization of the economy,” among others.

FOR A REAL CHANGE
The controversy between the neoliberal state model and the welfare state model, says the BP, is irrelevant to the genuine interests of the Venezuelan working class, since both serve capital and neither represents a truly revolutionary solution. Nor does it resolve the determinations that condemn Venezuela “to be an industrially backward country with a working class mired in precariousness and chronic unemployment.”

“The reversal of the current parasitic accumulation process will only be possible through a social revolution led by the working class, which will allow oil land rent to be converted into an instrument to boost industrial capital on the scale required to develop productive social forces,” and create the material conditions that make it possible to truly and definitively solve the serious social and economic problems that continue to plague the people, the BP document continues.

Such transformations, the declaration concludes, “can only materialize through the overthrow of the political power of the bourgeoisie expressed in the current state, and the subsequent construction of the democratic, workers and popular state that implements the central and scientific planning of the economy, centralizes the capital and convert it into social property under the administration of the new state and guarantee the universal social rights of the working class and the popular sectors.”