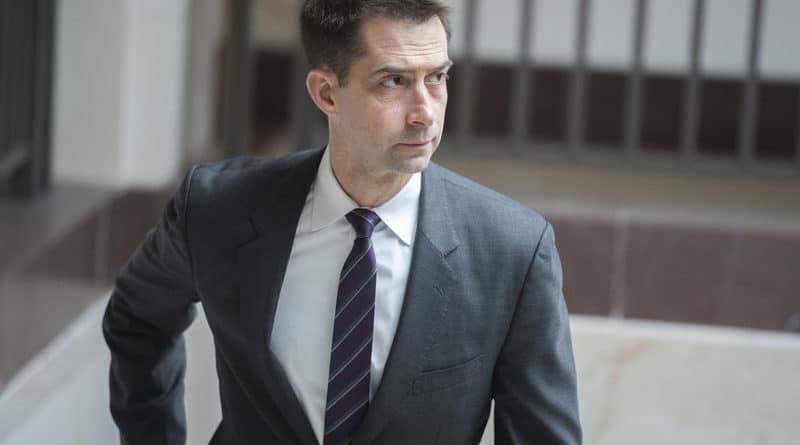 Adam Rubenstein, the New York Times editor who signed off on Senator Tom Cotton’s fascistic op-ed calling for US military troops to be deployed against protesters in American streets, is an anti-Palestinian activist.

And, if necessary, the 10th Mountain, 82nd Airborne, 1st Cav, 3rd Infantry—whatever it takes to restore order. No quarter for insurrectionists, anarchists, rioters, and looters. https://t.co/OnNJmnDrYM

Four years ago as a student at Kenyon College in Ohio, Rubenstein attacked Students for Justice in Palestine (SJP) and guest speaker Remi Kanazi.

He claimed that the presence of Kanazi, a published poet and a popular campus performer, “is part of a focus-grouped and incubated hatred, which is intellectualized, digitized and repeated ad nauseum. SJP targets you as the consumer for that hatred.”

Railing against the call for Palestinian rights as an anti-Semitic plot, Rubenstein asserted that the organizers who brought Kanazi to campus were engaged in a “twisted game of delegitimizing and demonizing Israel.”

SJP and Kanazi both support equal rights for Palestinians and Israeli Jews. Nevertheless, Rubenstein asserted that “Kanazi is a radical who preaches hate.”

Just found out that the 25-year-old editor the New York Times threw under the bus for the Tom Cotton piece wrote this racist, lie-filled screed about me and my show at Kenyon college 4 years ago: https://t.co/NRGwhIapjY

To a Zionist, "evil personified" is when Palestinians demand equal rights & an end to ethno-religious supremacy. #Fail http://t.co/niaPKj2F

After college, and prior to moving to The Times, Rubenstein worked for Bill Kristol’s now-defunct Weekly Standard.

The neoconservative Kristol was one of the main cheerleaders for the US invasion of Iraq.

Senator Cotton personally participated in the invasion and came away so psychologically broken that years later he could conclude that the horrors inflicted by the US military on the people of Iraq ought to be tried at home.

Jeet Heer of The Nation notes that Cotton’s connection to The Weekly Standard via Rubenstein “helped Cotton with the latest caper: publishing an op-ed in The New York Times on Wednesday calling for the use of the American military to quell rioters against police violence.”

New York Times staffers are claiming that the Cotton op-ed “was handled” by Rubenstein and that several other staff “had not been aware of the article before it was published.”

But the fact remains that editorial page editor James Bennet – whose anti-Palestinian racism The Electronic Intifada highlighted last month – claims he himself didn’t even bother to read the piece prior to publication.

While Bennet might not be expected to always read every single op-ed prior to publication, it is extraordinary that he would not be involved in such an explosive article from a high-profile politician at such a sensitive moment. At the very least, this points to woefully inadequate and incompetent control.

Unsurprisingly, Times opinion writer Bari Weiss leapt to the defense of the op-ed, which has been widely criticized within the newspaper for endangering the lives of Black employees at The Times.

The civil war inside The New York Times between the (mostly young) wokes the (mostly 40+) liberals is the same one raging inside other publications and companies across the country. The dynamic is always the same. (Thread.)

Weiss ludicrously charged that those objecting to Cotton’s article believe that the “right of people to feel emotionally and psychologically safe trumps what were previously considered core liberal values, like free speech.”

This is rich coming from someone who got her start as a campaigner to get Palestinian professors fired from her campus just because she didn’t like them speaking accurately about Israel’s history and abuses of Palestinians.

Now this anti-Palestinian bigot and crusader against academic freedom and freedom of thought is preening as a defender of free speech – but primarily for far-right-wing speakers, including a senator who wants to unleash the might of the US army on people protesting racialized police brutality.

Weiss has used her perch at The Times to write a puff piece about far-right demagogue Ben Shapiro without troubling to mention his history of anti-Palestinian and anti-Arab racism.

We mock because you launched your career as a snitch and then rebranded as a champion of free speech, you duplicitous nitwit.https://t.co/GLUGD17Yj6

In a recent article, I wondered if there was any limit to the anti-Palestinian racism of The New York Times. It appears that James Bennet has given his answer: As well as imperiling Palestinians, the newspaper adds incitement to endanger the lives of Black people and other activists protesting racist police killings.

Editorial page editor James Bennet has given considerable thought to the sort of racism he will allow in The New York Times https://t.co/b1Xsd5wBl5