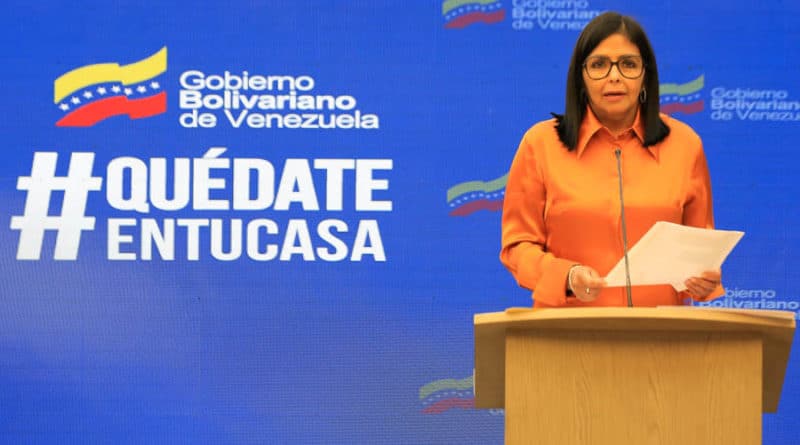 Venezuela confirmed two new cases of Covid-19 coronavirus in the country on Thursday, bringing the number infected by the outbreak to 381, said executive vice president Delcy Rodríguez. 48.6% of the cases have already recovered and, of 186 active cases, 97 are from Nueva Esparta state (52% of active cases), as a consequence of the outbreak in the baseball academy.

After the culmination of the daily and permanent brief of the commission to combat and prevent Covid 19 in Venezuela, Delcy Rodríguez noted that the 2 new cases are residing in the Anzoátegui state and entered Venezuela from Brazil through the Bolívar state.

RELATED CONTENT: US Mercenary: The Objective was Nicolás Maduro – US Plane Scheduled for Extraction to the US (Airan Berry)

She recalled that imported cases are handled at points of care on the border with Colombia and “the southern border with Brazil, the country that is ranked number nine with positive and deceased cases,” said Rodríguez.

The executive vice president, Delcy Rodríguez, also stressed that 97% are in hospitals, 71% in CDI, while 18 patients are hospitalized in private hospitals and the unfortunate number of 10 deceased remains the same.

“A virtual meeting was held today with the WHO for the exchange of international experiences, and Venezuela participated in South America, with a presentation by the minister for health, Carlos Alvarado, who “was able to present and exchange information on the local experience on Covid 19 cases in our country,” she added.

She indicated that 256 compatriots returned to Venezuela on Wednesday from Chile through the Plan Vuelta a la Patria Conviasa flights and stressed that the national government has all the protocols activated to treat and quarantine them when they return to the country.

She also reported that Venezuela has carried out a total of 502,771 screening tests for Covid-19 coronavirus, which is equivalent to 16,759 tests per million inhabitants.

She also noted that 15 million people have answered the latest survey on the quarantine situation through the Patria System. By tomorrow, Friday, May 8, “we will be presenting to President Nicolás Maduro the proposals prepared, studied and based on epidemiological territorialization at the national level, a study that we have crossed with economic sectors in order to preserve the life and health of absolutely all the Venezuelan population”, emphasized Delcy Rodríguez.

Finally, she stated that the Bolivarian government does not distinguish between sex, race, social class or political position, when it comes to attending to and guaranteeing the optimal circumstances of life for its people,” said Delcy Rodríguez from the Miraflores Palace in Caracas.