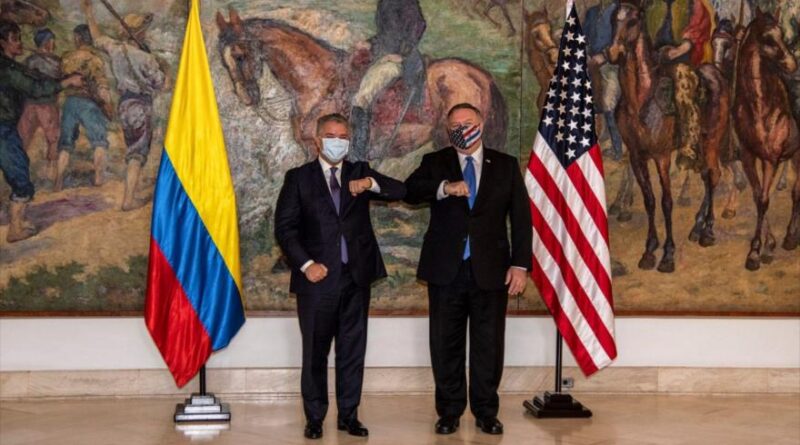 The Secretary of State of the United States, Mike Pompeo, and the President of Colombia, Iván Duque, agreed to continue their actions against the Government of Venezuela.

In the final days of his term, Donald Trump’s outgoing government seeks to achieve what it calls a “transition to democracy” in Venezuela. Pompeo had a telephone conversation Tuesday with Duque on this matter.

“Good discussion with Iván Duque,” Pompeo reported on Twitter. “We continue to be partners with Colombia to support the 1.7 million Venezuelan refugees who were forced to flee the repression of [President Nicolás] Maduro and work for a peaceful transition to democracy.” Most Venezuelans in Colombia claim they have not seen a single dime of that support.

Both visited the base of the Caribbean Naval Force in Cartagena, Colombia, and agreed to strengthen cooperation between both nations to fight against any threat in the Caribbean region, detailed the US Southern Command, “in charge” of Latin America.

Pompeo, who is leading a crusade against Venezuela, in March proposed a plan dubbed the “Democratic Transition Framework” that excludes President Maduro from power.

RELATED CONTENT: Diosdado Cabello: Venezuelan Constituent Assembly Fulfilled its Task and will be Dissolved on December 18

Caracas immediately rejected this plan, classifying it as a “pseudo-proposal” by the US to lift sanctions against Venezuela in exchange for a “transitional government.”

“Faced with Washington’s claim to impose in our country a pseudo-interventionist proposal of a supervised government, the Bolivarian Government reiterates that Venezuela does not accept, nor will it ever accept any tutelage, from any foreign government,” said then the Venezuelan Foreign Minister, Jorge Arreaza.

The Maduro government denounced Bogotá’s subordination to Washington on various issues, including the diplomatic siege to provoke social disorder and a military uprising in the Bolivarian nation. The Venezuelan president denounced the hatching of plots to assassinate him on the part of both Colombia and the United States, and their attempts to destroy inter-Venezuelan dialogues and push the country to the brink of war.