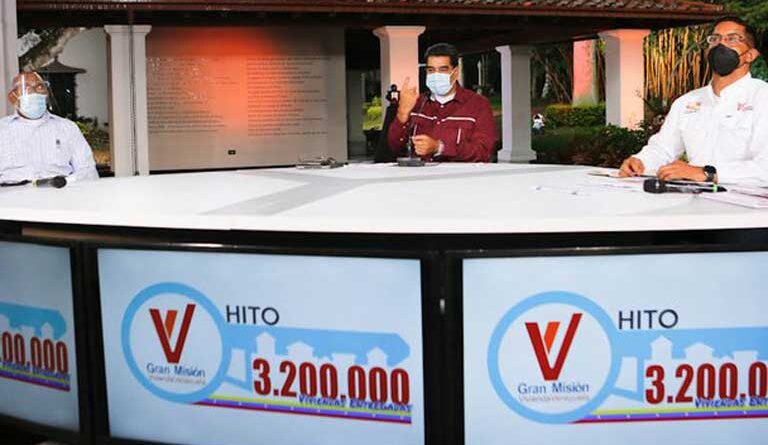 The President of Venezuela, Nicolás Maduro, handed over the house number 3,200,000 of the Great Venezuela Housing Mission (GMVV) on Thursday, and announced that this year 400,000 homes will be built, while by 2021 that goal must be exceeded .

“We are the only country in the world that is building homes in the midst of the most drastic pandemic that humanity has experienced in 100 years. During the 200 days of quarantine we have delivered 200 thousand homes,” said the Venezuelan socialist president.

He highlighted that 70% of the houses were built using the Venezuelan Living Assembly (AVV), an organization where the same community carries out the work with the help of the government.

5 million by 2021
The president called on the bodies in charge of housing construction to build five million houses by 2021.

‘The goal of 400,000 homes built will be kept, to reach the GMVV’s five million homes. The pandemic and the tremendous blow that the country receives, due to the US led economic aggression, cannot stop us. We have to build five million houses. It is a matter of honor, to fulfill our people and that they have their homes, only socialism can build beautiful homes,” he said.

Milestone 3,200,000 in Lara state
Through a TV conection, the key to the house number 3 million two hundred thousand was delivered in the Robert Serra neighborhood in Lara state.

The Head of State stressed that it is necessary to hand over responsibilities to the communities for self-construction, make alliances with the country’s private sector and activate 100% of the municipal sectors to accelerate the construction of houses and recalled that by 2021 Veenzuela should reach five million homes.

Likewise, 24 homes were delivered in the state of Barinas, where more than 7 thousand homes are being built for the benefit of the population, with a joint effort between the Ministry of Housing, the Mayor’s Office and Mission “Barrio Nuevo Barrio Tricolor.”

On the other hand, they delivered 202 homes in Trujillo state through alliances with the private sector that have used the Petro as a financing tool.