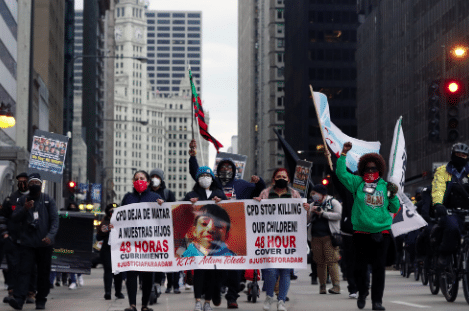 Hundreds of protesters took the streets of Chicago, demanding reform of the police department, after the death of teenager Adam Toledo at the hands of an agent, reported local media.

With signs reading “Justice for Adam” and “No More Murderous Cops,” people gathered in Logan Square Park on Friday.

RELATED CONTENT: Venezuela Extends Solidarity to US Citizens for Mass Shootings in Georgia and Colorado (Communiqué)

The group of protesters swelled by the thousands as they marched through the neighborhood, closing the six-corner intersection of Milwaukee, Diversey and Kimball, according to local broadcaster WLS-TV.

Many of the marchers said that they were there to protest against a police system that just doesn’t work, and they wanted authorities to hear that message.

Local television station WLS-TV, operated by ABC licensed for Chicago, reported that while some protesters had planned to march to Mayor Lori Lightfoot’s home, police did not allow them to do so.

Although most of the protests on Friday were peaceful, a small group had clashes with law enforcement officials, according to that outlet.

The protesters demanded action against the police for the death of the teenager, calling it another case of unjustifiable use of force.

However, according to the news outlet The Hill, the head of the Chicago Police Union, John Catanzara, maintained that the police shooting was “justified” and described the actions of the officer who shot Toledo as “heroic.”

For his part, former Washington DC Police Chief Charles Ramsey told CNN that “the shooting was reasonable” although it was a tragic incident.

Body camera footage, released Thursday by the Chicago Police Accountability Office, show 13-year-old Adam Toledo fleeing from an officer down an alley before a police officer ordered him to stop.

The teenager turned around and raised his hands above his head in a pose of surrender, but police allege that he was seen holding a gun, although this is not clear from the video.

Moreover, in the recording, an officer, identified as Eric Stillman, is heard telling the teenager to drop the gun, before shooting him in the chest.