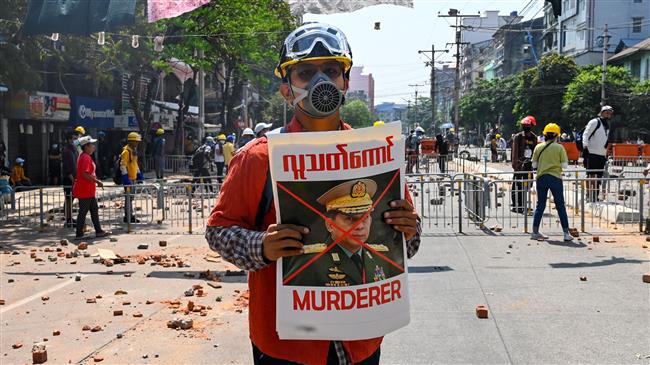 People have once again flocked to the streets in several cities across Myanmar to protest the deadly military crackdown on anti-coup protesters and the apprehension of the country’s de facto leader.

Media reports said the protests were held in Myanmar’s largest city of Yangon and other towns on Tuesday but were quickly broken up by security forces using tear gas and stun grenades.

At least two people were reported to have been wounded, one by a gunshot, in the town of Mohnyin in the north.

Online television broadcaster Kamaryut Media said its office in Yangon had been raided and two staff members had been taken away by plainclothes officers while military vehicles waited outside.

Reporters without Borders censured the ongoing media crackdown and characterized the raid as “a shocking act of intimidation.”

Yangon was the scene of a mass rally a day earlier as thousands of people defied a night time curfew and took to the streets of the city in support of the youths in the Sanchaung district, where they had been holding a daily protest against the coup.

Local media reports said Myanmar’s junta had warned of using guns and stun grenades to disperse the protesters in Sanchaung, also threatening to check the entire houses for anyone from outside the district and punishing anyone caught hiding them.

Residents told AFP that security forces started searching apartments after a nightly internet shutdown, with one saying her home, which did not have any protesters hiding inside, had been fully searched room by room.

“They searched every building on Kyun Taw road, they destroyed the locks of apartment buildings if they were locked downstairs,” said the resident.

RELATED CONTENT: Myanmar Workers and Unions on the Front Lines in Fight Against Coup

An advocacy rights group said around 50 people had been taken into custody in Sanchaung after police searched houses, and that the checks were still being made.

Reacting to the latest developments, UN Secretary-General Antonio Guterres called for “maximum restraint” and the safe release of all protesters.

The junta, which has declared a one-year emergency across Myanmar, claims that it seized power after it found fraud in elections held three months earlier that the NLD had won in a landslide.

Since then, hundreds of thousands of people have held numerous protests against the coup leaders in the Southeast Asian country, demanding the release of Suu Kyi and the other detainees.

More than 60 protesters have been killed since the coup and over 1,800 detained, according to data from the Assistance Association for Political Prisoners monitoring group.

The United States, Britain, and others have called for Suu Kyi’s release and the restoration of her government. They have imposed limited sanctions on members of the military and its business links.

Moreover, Australia is reportedly considering cutting defense ties with Myanmar and the European Union (EU) is set to widen sanctions to target businesses run by the junta.

Nun kneels in front of police to stop Myanmar violence

Also on Monday, video footage showed a nun kneeling in front of Myanmar’s military personnel in the northern town of Myitkyina and pleading with them to stop shooting protesters.

Sister Ann Rose Nu Tawng, clad in a white robe, was seen kneeling on a street in Myitkyina, and was later quoted as saying in a report by Reuters that, “I begged them not to hurt the protesters, but to treat them kindly like family members.”

“I told them they can kill me, I am not standing up until they give their promise that they will not brutally crack down on protesters,” she said.

“We heard loud gunshots, and saw that a young kid’s head had exploded, and there was a river of blood on the street,” Tawng said, adding that at least two protesters were killed and several others injured.

In another development on Monday, the Myanmarese junta leader claimed that the detention of Sean Turnell — an Australian financial adviser to Suu Kyi — had led to the discovery of secret financial information.

Turnell was detained on February 6, five days after the coup.

“An attempt to flee the country by the former government’s foreign economic adviser, Sean Turnell, was stopped in time and secret state financial information was found through him. Union-level ministers are taking legal actions in relation to that issue,” the state-run MRTV television quoted Aung Hlaing as saying.