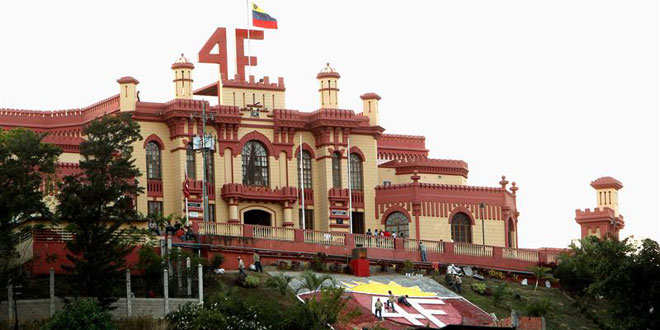 The actions of the civic-military insurrection of February 4, 1992, were directed from the 4F Mountain Barracks, at that time known as the Military Historical Museum.

On Tuesday, the United Socialist Party of Venezuela (Psuv) called for a great mobilization in Caracas to celebrate the 28th anniversary of the civic-military rebellion of February 4, 1992, commanded by the leader of the Bolivarian Revolution, Hugo Chávez, for the dignity and rights of the population, mostly impoverished by the neoliberal policies that characterized the fourth Republic.

During a broadcast on Monday by Venezuelan Television, the Vice President of Mobilization and Events of the aforementioned organization for political purposes, Darío Vivas, informed that the Venezuelan people will begin to gather at O’Leary Square from 5 in the morning to March to the Mountain Barracks, in the January 23 Parish.

This mobilization is part of a series of activities programmed in the national agenda to celebrate Rebel February.

This Tuesday marks the 28th anniversary of the rebellion of February 4, 1992, a civic-military uprising led by Commander Hugo Chávez against the government of Carlos Andrés Pérez, which kept the Venezuelan people in a deep social, political and economic crisis with the neoliberal policies adopted after going to financing agencies. These policies caused strong social protests, such as those of February 27, 1989, which left between 3 and 5 thousand dead.

RELATED CONTENT: The Reasons Why the US Does not Consider -For Now- the Military Option

The “For now” – a phrase expressed by Chavez on February 4 live on television to ask his fellow comrades in various parts of the country to lay down their weapons “for now” – made hope resurface in the humblest people. This action is considered by a large part of the Venezuelan population as the failure of an inoperative system, the beginning of the end of a period of decline and the birth of a different Venezuela, which sought to realize the project of justice, equity and social inclusion.