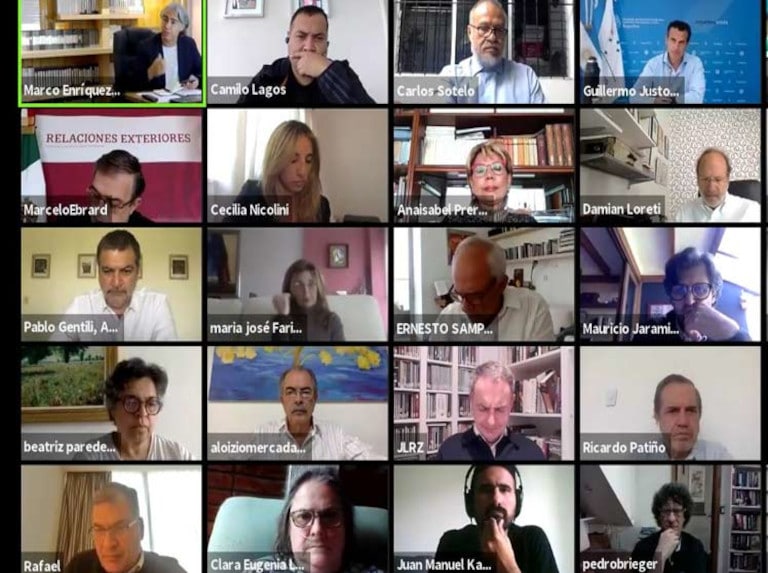 Today the members of the Puebla Group, through a powerful call to rebuild unity in Latin America, started to construct the foundations of a Progressive Manifesto based on a model of solidarity, far from neoliberalism.

An intense online debate of two hours marked the fifth meeting of the alliance. The meeting was conducted virtually, through video conferencing, in which were present political personalities like the president of Argentina, Alberto Fernández, who was one of the proponents of the alliance in 2019, and former presidents of various countries like Dilma Rousseff and Luis Inacio Lula da Silva of Brazil, Rafael Correa of Ecuador, and Ernesto Samper of Colombia.

Samper, a very active member of the Group, was in charge of pronouncing the final remarks on the Manifesto, a proposal under construction which seeks to consolidate Latin America through progressivism as a region of peace, and to end inequality through the reactivation of regional solidarity, such as economic cooperation, among other things.

The speeches and interactions on the need to strengthen regional integration were diverse but all coinciding on pressing issues such as concern over universal access to COVID-19 vaccines.

In his concluding remarks, Samper stated that the document calls for an initiative to try to start searching for common denominators within progressivism, referring to the strengthening of the State, control of the market, and organization of the civil society.

Likewise, he emphasized proposals from various participants on the role of the Community of Latin American and Caribbean States (CELAC), the digital divide, the need to be united and to strengthen integration, as well as not to leave out sister countries such as Cuba and Venezuela.

Lula, wearing a red guayabera that he brought from his recent trip to Havana, thanked the Cuban brothers and sisters for the medical treatment that he received there to recover from COVID-19 and insisted on supporting the island nation and Venezuela.

The issue of soft coups and the question of who would pay the social cost of the pandemic, expounded on by Ecuador’s former president Correa, mark the core of the document in which progressive personalities also express their concern about the absence of solidarity mechanisms of international cooperation for access to vaccines.

Apart from a call to put into action and practice the solutions to the concerns faced by the region, the members of the alliance also agreed on the issue of the international role of the Puebla Group, composed of personalities from 17 countries.

In this regard, Samper proposed to create an advisory committee on international politics within this progressive mechanism, in which former foreign affairs ministers would participate.

At the end of the meeting, Marco Enríquez-Ominami, founder of the Peubla Group and former presidential candidate of Chile, said that the Manifesto is a trigger that sends the alliance to a participatory path to advance progressivism through action.