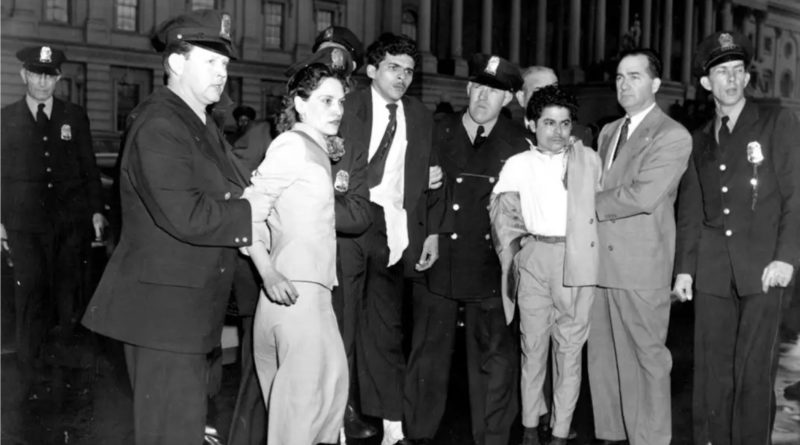 Official statement on the death of our beloved national hero Rafael Cancel Miranda:

Rafael Cancel Miranda, national hero and fighter for the independence of Puerto Rico, has died

The last survivor of the nationalist group that carried out the attack on the U.S. House of Representatives on March 1, 1954

The leader and former political prisoner Rafael Cancel Miranda passed away today at 9:10 p.m. at his residence in Río Piedras in the company of his closest relatives and comrades in struggle. For several weeks the renowned fighter for the independence of Puerto Rico had suffered from multiple health failures that kept him hospitalized.

As reported by his widow, María de los Ángeles Vázquez, and his youngest son, Rafael Cancel Vázquez, at the time of his departure, Cancel Miranda was alert and conscious and died peacefully surrounded by his loved ones.

Cancel Miranda was born on July 18, 1930, into a deeply nationalist family. His father, Rafael Cancel Rodríguez, a businessman and close collaborator of Don Pedro Albizu Campos, presided over the Junta de Mayagüez of the Nationalist Party. His mother, Rosa Miranda Pérez, came from a family of fishers in the Corsica de Rincón neighborhood.

RELATED CONTENT: Oscar Lopez Rivera: “Socialism is an Alternative that Can Move Us Forward”

From a young age, Cancel Miranda identified with the movements aimed at fighting for the political freedom of his homeland and social and economic justice for all Puerto Ricans. He became aware at an early age of the colonial regime imposed by the United States government in his homeland and how it constituted the main impediment to his country’s development. Rafael Cancel Rodríguez and Don Pedro Albizu Campos were the guides in his patriotic formation and, at age 15, he formalized his commitment to the ideal of independence for Puerto Rico by joining the Nationalist Party and becoming a Cadete de la República.

On March 1, 1954, together with Lolita Lebrón, Irving Flores Rodríguez and Andrés Figueroa Cordero, he carried out the attack on the United States Congress, an act for which he was sentenced to 84 years in prison, of which he served 25-and-a-half years in federal prisons in the United States. Prior to this incarceration, he had served two years and one day in prison for refusing to enroll in the United States Army and participate in the Korean War.

In 1979, after intense campaigns for the release of the nationalists in Puerto Rico, the United States and other countries, as well as an exchange of prisoners proposed by Fidel Castro and the Revolutionary Government of Cuba, then-President of the United States Jimmy Carter signed the unconditional commutation of the sentences of the Puerto Rican nationalists.

Rafael Cancel Miranda arrived in Puerto Rico on Sept. 12, 1979, along with his comrades Lolita Lebrón and Irvin Flores Rodríguez. Andrés Figueroa Cordero had been released in 1977 for health reasons and died in March 1979.

Oscar Collazo López, who had been imprisoned since 1950 for his participation in the nationalist attack on the Blair House, the temporary residence of President Truman, also returned to the homeland with his comrades.

Following his release, Cancel Miranda continued his political activism for the independence of Puerto Rico and actively participated in the campaigns for the release of Puerto Rican political prisoners, as well as that of the Cuban Five heroes. A dedicated anti-imperialist, Bolivarian and internationalist, he supported with his writings, and on several occasions with his presence, the revolutionary struggles in the Caribbean countries, as well as in Central and South America, and supported, among other international struggles, the struggle of the Palestinian people.

He was a man of extraordinary human sensitivity who was deeply touched by the poverty and vulnerability of the Puerto Rican people. He was generous with the homeless whom he passed daily in the streets of the city, with the poor families who came to buy in the La Puertorriqueña furniture store, inherited from his father, and with friends and strangers who came to request his intercession in the solution of some personal situation.

Cancel Miranda also excelled as a writer. His extensive work, collected in nine books, as well as in national and international newspapers and magazines, consists of essays of political analysis, history of events and participants in the deeds of the Nationalist Party, as well as abundant poetry. His latest book, “Más allá del Espejismo” [“Beyond the Mirage”], was published in December 2019.

Rafael Cancel Miranda remained faithful to the nationalist ideal throughout his life and promoted with his example unity among all sectors of the independence movement, as well as the unity of “all Puerto Ricans in good faith.” He lived according to the maxim that guided his life: “You reach the goal sooner on your feet than on your knees.”

The acts of farewell and celebration of his life will take place in San Juan and Mayagüez. At the request of Cancel Miranda, flags should not be lowered to half-mast: For the patriots, the flags should fly as high as possible, always free, he said repeatedly.