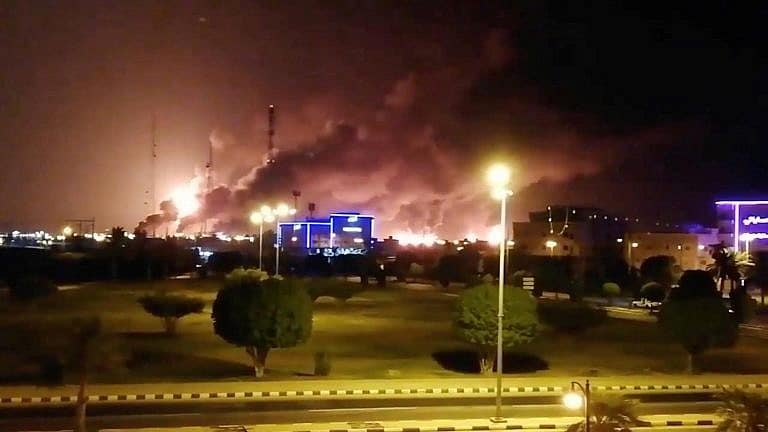 The oil supply in the world may be severely affected in the short term after a drone attack on Saturday at two oil facilities owned by the state-owned Aramco, in Saudi Arabia. Saudi Energy Minister Abdulaziz bin Salman said the attacks had reduced its oil production by 5.7 million barrels a day, about half of what that country extracts under normal conditions.

In statements released by the state-run Saudi Press Agency, Bin Salman said the suspension of production was temporary and that his customers will supply part of the missing product with the use of their crude oil reserves. He explained that the attacks also led to the cessation of the production of some 700,000 barrels a day of condensate natural gas, associated with oil production.

According to several Saudi media, the action caused major fires in the Abqaiq refinery, the country’s main plant, and in the Khurais oil field.

Local authorities said the fire was already controlled in both facilities and there were no human losses.

Yemen’s Houthi rebels, who have been at war in that country for several years against an international coalition led by Saudi Arabia, claimed responsibility for the attacks.

A strategic place
This attack in Saudi Arabia affects one of the most important oil facilities on the planet.

The Khurais field produces about 1% of all the oil consumed in the world, while the Abqaiq refinery has a capacity to process up to 7% of the global supply.

“Given its size, even a brief or partial interruption in its operations can affect the company and the world’s oil supply,” warns Katie Prescott, a BBC business correspondent. “This country produces 10% of the crude oil that is extracted on the planet. Cutting it in half could have a significant effect on the price of oil on Monday, when markets open,” he added.

Aramco is not only the largest oil producer in the world, but also the one that generates the most benefits.

Jason Bordoff, director of the Center for Global Energy Policies at Columbia University, warned that these events may have an important effect on oil prices. “Abqaiq is probably the most crucial facility in the world for oil supply. Prices will jump after this attack,” he explained.

“If the interruption in Saudi production is prolonged, it seems likely and sensible that members of the International Energy Agency (IEA) will release crude oil from its strategic reserve,” he told Reuters.

What did Pompeo say?
In a tweet, Pompeo said “there was no evidence” that the drones came from Yemen.

He described the assault as “an unprecedented attack on the world’s energy supply.”

We call on all nations to publicly and unequivocally condemn Iran’s attacks. The United States will work with our partners and allies to ensure that energy markets remain well supplied and Iran is held accountable for its aggression

“We call on all nations to publicly and unequivocally condemn the attacks of Iran,” Pompeo added.

He said the United States would work with its allies to ensure that energy markets remained well supplied.

The White House said Trump had offered American support to Saudi Arabia to defend itself, not a surprise given the multibillion dollar arm deals between the 2 countries and the US support to the Saudi invasion in Yemen.

Iran’s response
Iran has dismissed the accusations made by the United States. The spokesman for the Iranian Ministry of Foreign Affairs, Abbas Musaví, said that these are “nonsense” accusations that seek to destroy the image of Iran to pave the way for future actions.

“The Americans have followed a policy of maximum pressure that, due to its failure, seems to tend to maximum lies,” said the chancellor. In this regard, Musaví described as “blind accusations” the statements of the head of US diplomacy and said they lack “a minimum of credibility.”

“These types of measures are more like the plans of the intelligence agencies to destroy the image of a country (Iran) with the aim of paving the way for some future actions,” he warned.

Iraq, on the other hand, denied information that the drones attacking refineries in Saudi Arabia on Saturday night were launched from their territory.

“Iraq refutes reports from various media and social networks that its territory was used to attack oil facilities in Saudi Arabia with the use of unmanned aerial vehicles,” the press service of the country’s prime minister, Adil Abdul Mahdi, said Sunday.

War in Yemen
A spokesman for the Houthi group in Yemen said they had deployed a fleet of 10 unmanned aircraft – drones – to carry out the attack.

Yahya Sarea told the network Masira TV, owned by the Houthis and which operates in Beirut, that there would be more attacks of this kind in the future.

He added that this Saturday’s attack has been one of the largest operations carried out within Saudi Arabia and was executed “in cooperation with honorable people within the kingdom of Saudi Arabia.”

For their part, the Saudi authorities did not comment on the possible perpetrators of the attack.

“Around 4:00 in the morning (local time), the Aramco security teams had to face two fires at the Abqaiq and Khurais plants produced by drones,” the Royal Saudi news agency reported.

“The two fires have been controlled,” they added.