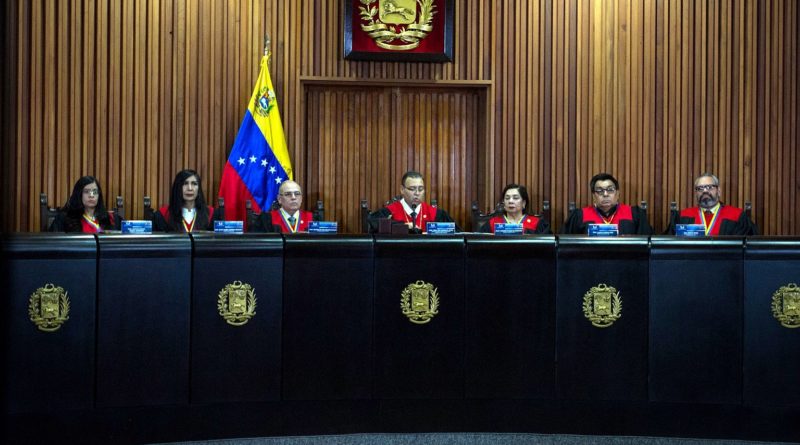 The Supreme Court of Justice (TSJ) of the Bolivarian Republic of Venezuela declared the absolute nullity of the partial reform of the Interior and Debate Regulations that a group of deputies the National Assembly (AN) in contempt approved last Tuesday, December 17. “There are elements necessary for a legislative act to have the legality and legitimacy, which, due to public, notorious and communicational facts, were disrespected, knowing the inadequate call for said reform process, which must comply with all formalities. [This is the] reason why we declare the absolute nullity of the modification of the aforementioned law that the National Assembly in contempt has performed or intends to perform,” said the president of the Constitutional Chamber of the Supreme Court, Judge Juan José Mendoza.

During the reading of the pronouncement of the highest court of the country, Mendoza added that the National Constitution requires the exclusive dedication, as well as the physical presence of the parliamentarians, for the effective fulfillment of their duties.

“The National Assembly, as a public power, as well as all the collegiate bodies, obliges the physical presence of all its members, incumbents or alternates, to deliberate to agree and make decisions. Hence, all parliaments of the world must have headquarters,” Mendoza explained.

He also highlighted the “assault on the rule of law and all public powers” by the National Assembly, stressing that, being in contempt, its acts are “absolutely void.”

“This Pyrrhic act would lead to the dissolution of the rule of law in Venezuela and it is necessary to make it known to the people and the international community,” Mendoza stressed.

Judgment No. 517-2019 of the Constitutional Chamber of the Supreme Court, read by Judge Mendoza, declared the highest legal instance in the country competant to hear and decide the annulment action filed by citizens Leandro José Domínguez Báez, Jesús Gabriel Peña Navas and José Gregorio Noriega Figueroa, as Venezuelans, deputies of the National Assembly of the Bolivarian Republic of Venezuela.

RELATED CONTENT: Anti-Chavismo Intends to Implement a Virtual Parliament so That Fugitive Deputies Can Vote

The magistrate recalled that said decision confirms that “any action by the National Assembly and any body or individual against the decision will be void and devoid of any legal validity and effectiveness, without prejudice to the legal responsibility that may arise.”

He also pointed out that the claim to modify the internal regulations of the AN “represents a disastrous precedent for the world’s democracies and would in fact eliminate the characteristics of the popular mandate, by making it impossible to form laws, the requirement of accountability, exclusive dedication to its functions and the popular, political and moral control of its actions, which would be the death of parliament as a constitutional scenario of participation, debate and consensus.”

The decision of the TSJ responds to a petition for annulment filed by opposition deputies Leandro José Domínguez, Jesús Gabriel Peña and José Gregorio Noriega, on Wednesday 18 before the judicial body.

On the other hand, the Supreme Court urged the Office of the Attorney General of the Republic “to criminally investigate the alleged materialization of constitutive behaviors of criminal types contemplated in the Constitution and the Law.”