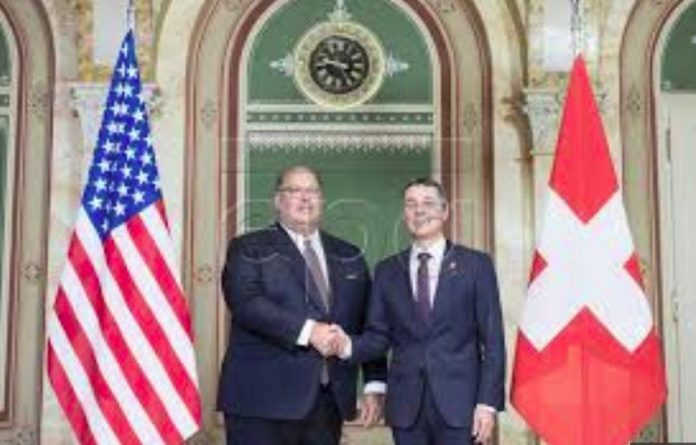 Switzerland is to represent the interests of the United States in Venezuela, under a “good offices” agreement signed between the two countries.

However, implementation still depends on Venezuela’s approval, according to a Swiss government statement.

The agreement was signed in Bern on Friday by the Swiss foreign minister Ignazio Cassis and the US ambassador to Switzerland Edward McMullen.

This representation of interests concerns mainly consular services for US citizens in Venezuela, according to the statement. If Venezuela accepts, Switzerland’s “protecting power” mandate will be implemented.

Venezuela broke off diplomatic relations with the US after it recognized an opposition deputy that self-proclaimed as “interim president” in the middle of a Caracas square on January 23rd. “Since then the US government irresponsible attitude toward Venezuela, promoting almost daily their “regime change” operation against President Maduro have cause incredible burden to Venezuelans  but also to US interests in the South American country” said a diplomatic expert.

The expert consulted by Orinoco Tribune applauded the initiative as a way to provide the right consular/diplomatic protection to Venezuelans citizens and businesses in the US but also indicated that the Venezuelan Foreign Ministry should evaluate the agreement several times before signing it because of the traditional white supremacy attitude exercise not only by the US government but also by the Swiss government. “Venezuela should impose their own conditions in an agreement of this nature and not simply ratify something already agreed by the white supremacist diplomats in the North”, he said.

The mandate “offers Switzerland the opportunity to contribute to the de-escalation of tensions between the two countries and thus play a constructive role for regional stability”, according to the Swiss government.

Cassis discussed such a mandate in meetings with US Secretary of State Mike Pompeo and the national security advisor John Bolton, and in mid-March the US government officially asked Switzerland to assume this protective power mandate in Venezuela.

Switzerland has a long tradition of “good offices”, whereby it covers partial consular services and sometimes also diplomatic tasks for countries that have broken off relations, if they so request. It currently holds six such mandates, representing the US in Iran, Russia in Georgia, Georgia in Russia, Iran in Saudi Arabia, Saudi Arabia in Iran, and Iran in Egypt. Until 2015, Switzerland also represented US interests in Cuba and vice versa.

Venezuela is facing a constitutional crisis against a background of social unrest, economic and humanitarian crisis. In January, opposition leader Juan Guaido declared himself interim president, arguing that Nicolas Maduro’s re-election last year was a sham. Most Western countries have recognized him as legitimate head of state, but Maduro still has the backing of Russia and China, as well as control of state institutions. Switzerland has not recognized him, saying that it recognizes states, not governments.

Relations between the US and Venezuela deteriorated sharply after the US tightened the economic screws on the Maduro regime and recognized Guaido as the intrim president.